Pesticide: a chemical substance that kills insects, weeds, or other organisms thought of as pests.

Are Transgenic Plants Safe to Eat? 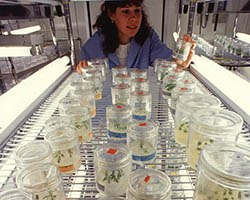 All GMOs are grown and extensively tested in labs to make sure they pass safety tests before they can be sold. Image by the Agricultural Research Service.

If a transgenic plant is going to be sold as food, the federal government requires companies to test the plant’s safety first. Even after the plant is approved by the government, many other scientists also study the plant on their own to verify if it is safe or not. 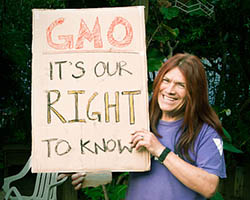 Many people believe GMOs are bad for health. Many GMO protesters do not understand how GMOs are created or tested. Image by Daniel Goehring.

But many people still believe transgenic plants are unsafe. Sometimes, this is simply because they don’t understand how genetic modification works and that can be scary. Other times, it is because it can be difficult to determine what information you can trust.

What Information Can You Trust?

There are a few tips you can follow to decide whether or not a paper can be trusted. First of all, you want to make sure that the study is published in a science journal. For published articles, you can use a trusted search engine such as PubMed or the Web of Science. You can also check what companies or schools the authors are associated with to make sure it is somewhere legitimate research is usually done.

If you find a study of interest, you can try reading it to see if the study is well-designed. You can check to make sure the study had reasonable controls (a non-tested group) as well as groups that were given reasonable treatments (what was being tested). The experiment should be tested using several different individuals, locations, animals, or whatever the subject of interest is. Every method used should also be discussed so that someone else could complete the study.

If you don't trust yourself to judge the science in an article, there is another trick you can use. You can look into the quality of the journal in which the article is published. Most legitimate journals have a measure that we call an impact factor. The impact factor tells you how many times a paper from that journal has been mentioned in other published papers (this act is called "citing" a paper) over a specific time period.

Sometimes, publications based on bad science can still slip through the cracks and wind up in a respectable journal or getting cited. But usually, the rest of the scientific community will catch these mistakes fairly quickly and published studies can be retracted, meaning the journal removes the article from publication.

This study was published in a respectable journal but had to be retracted due to poor experimental design. Click for more information.

So how does this all currently measure up in the world of transgenic crops? No legitimate evidence has shown that transgenic crops are harmful to humans. There is also no strong scientific hypothesis, or reason, why the currently available transgenic plants would be unsafe.

How would taking a gene from a harmless type of bacteria and putting it into corn make the corn unsafe? Why would taking a gene from a potato and putting it into a different potato make it inedible? Why would changing one or two specific genes in a species be more dangerous than hybridizing two species and changing thousands of genes in the process?

There is no scientific reason why this would be unsafe, but even so, scientists are constantly testing transgenic and non-transgenic foods to see how they affect human, animal, and environmental health. 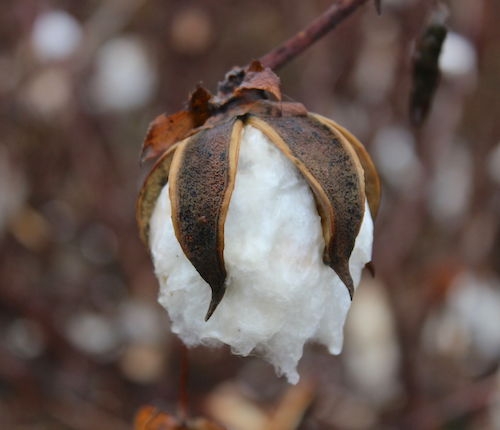 Transgenic cotton is modified to resist insect pests. This makes it so farmers don't need to use as many pesticides.