Chymosin: an enzyme that is used to break down the proteins in milk; humans use this enzyme to make cheese.

A World Without GMOs

What would the world be like if we didn’t have any laboratory created genetically modified organisms? What if we did away with all transgenic technology? If this happened we would lose much more than just a few GMO plants. Many types of medicines would not exist and we would have to farm millions of more animals to produce some of the medicines and enzymes humans use. 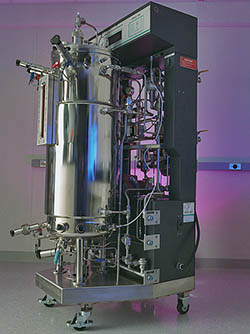 Bioreactors are machines where scientists can grow certain cells. Click for more information.

Many medically and commercially useful proteins are manufactured in transgenic organisms or cells. Proteins are sort of like very tiny machines good at a one specific job. They often have very complicated 3-dimensional structures which means it isn’t practical to make proteins chemically.

Because cells are natural protein factories, the DNA for a specific protein can be inserted into a cell and then billions or trillions of these cells can be grown in a bioreactor. After growing the transgenic cells in a bioreactor, the desired protein is purified, removing the cells.

The first mass-produced protein made in a transgenic organism is one of the most important proteins in all of human medicine – insulin. Insulin is a protein that enables your body to extract energy from sugars. People with diabetes don't make or respond to insulin properly within their bodies. They need extra insulin in order to stay healthy. Diabetics used to have to get insulin that was extracted from pigs or cows. This is an inefficient process that requires a lot of animals.

Since 1980, insulin has been primarily made by putting the gene for human insulin into Escherichia coli bacteria. This type of insulin does not contain any bacteria after it is purified. Without these heroic GMO bacteria, we would need to greatly increase the amount of farmed animals to harvest animal insulin, and even then, there might be a shortage of insulin. 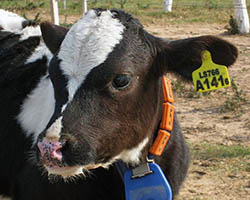 We can use fungi, rather than cow stomach cells, to make the enzyme needed to produce cheese. Image by Alicia Nijdam.

Cheese is made from milk with the use of a special enzyme called chymosin. Chymosin used to be harvested from the stomachs of baby cows. In modern times most cheese is made using chymosin that is produced by a transgenic fungus in a bioreactor.

In a world without transgenic organisms, many cows would needlessly be sacrificed each year to make cheese.

There are many transgenic organisms that are important for medical research. In order for scientists to understand the function of a protein, they might create an animal that has the gene for that protein removed or “knocked out” and then see how this mutation affects the animal's health or behavior. This is commonly done in laboratory fruit flies and mice. 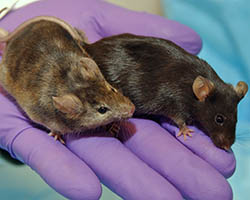 Knockout mice have a specific gene that has been "turned off" so it doesn't work properly. This helps scientists understand what specific genes (or the proteins they make) do.

Even though humans are genetically very different from fruit flies and mice, this type of research has led to the development of important medicines for many diseases including cancer, heart disease, and obesity. Mutant animals have also improved our understanding of how the brain works.

In a world without transgenic research animals we wouldn’t be able to treat cancer as well as we do now, we would have a poor understanding of how the brain works, and we would have little hope for future treatments of serious diseases.

These are just a few of the opportunities for genetic engineering technology to help improve the lives of humans and other organisms. Perhaps you can think of some more on your own. Make sure to keep trying to understand how genetic modification technology works. It is important to appreciate how transgenics have helped us develop technologies that improve human life and health. 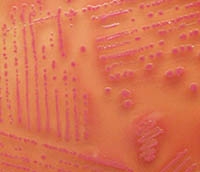 Escherichia coli bacteria are used to make medicine for some people.