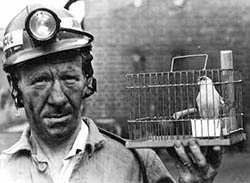 Canary used by miners to tell if gas levels were becoming dangerous.

There was a time when coal miners used birds in cages to tell when gases in the mines were becoming dangerous. The birds were the early warning systems that let miners know unsafe levels of gas were building up in the mine shafts. It’s why we have the phrase, “canary in a coal mine.” Tiger beetles help scientists in much the same way for environments.

In parts of the world tiger beetles have become the canaries for the environment. They are used as habitat thermometers measuring not temperature but the health of the habitat. Because tiger beetles are so sensitive to changes in the environment, they are among the first species to react to pesticides, misuse of habitats, and climate change. We call them bioindicators because we can use them to more quickly see if something is wrong in the environment. By watching them, looking at their behavior, and counting their numbers, we are more likely to see changes in the environment early. Then we might be able to do something about the changes or problems before it is too late.

A Count We Can Count On 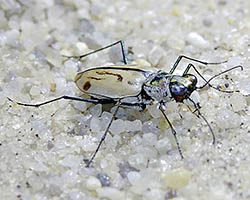 Northeastern beach tiger beetle is found in less places than 25 years ago. Click to enlarge and for more information.

Wherever we find many species of tiger beetles living together, we also find many birds, butterflies, dragonflies, and other species. In this way, tiger beetles can help us understand which areas of land are most important to save or protect.

In many parts of the world the species that are there have not been studied or don’t even have official names yet. For example, it takes years to know how many bird species are in an area. Tiger beetles, however, are very obvious and easy to identify wherever they are. Because of this they have been studied so much around the world that even in the middle of the Amazonian forest we can quickly count how many species of tiger beetles are there.

If we want an actual estimate of the number of species of birds, butterflies, and other animals that are in an area, tiger beetles can help us yet again. Knowing the number of tiger beetle species in an area can help us estimate species numbers for other animals. This saves us the time and money it would take to study all these animal groups separately. 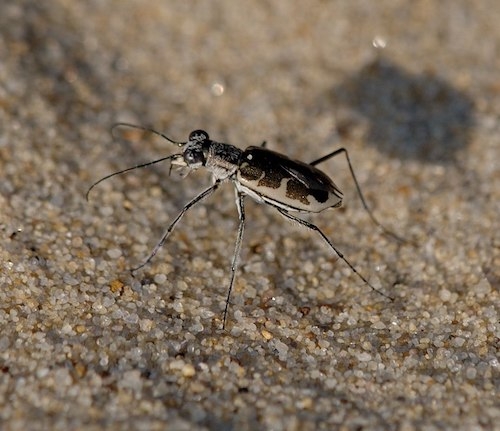