Tiger beetles have body parts that you can find on most other insects – six legs; two pairs of wings; and a body divided into three parts (head, thorax, and abdomen).  They also have some parts that are distinctive to their group – large eyes that together make the head wider than the thorax; long, thin mandibles; long, thin legs; and distinctive patterns of markings on the hardened fore-wings (elytra). 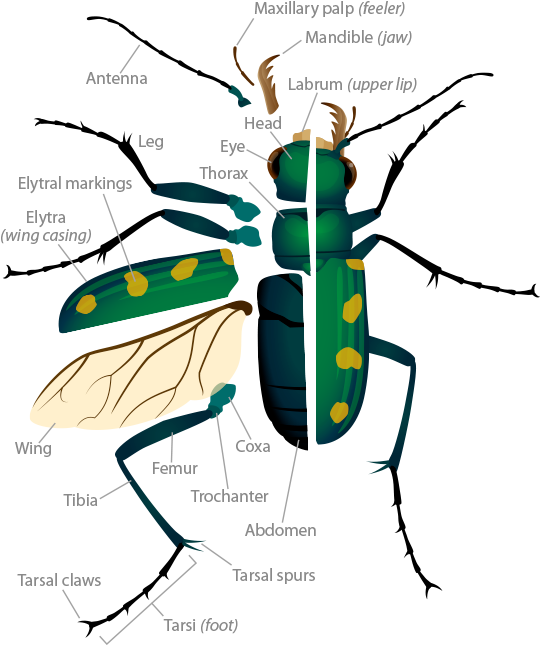 The anatomy of a tiger beetle is similar to other beetles. Click on the image to enlarge.

The large eyes are very sensitive to movement; the long, thin antennae detect barriers and food; the finger-like palpi serve as fingers to manipulate food into the mouth. The mandibles chew up and crunch food so that body liquids can be sucked in; the labrum or upper lip helps hold and manipulate food. Inside the head are the brains and muscles for the mandibles.

This part of the insect body is dedicated almost completely to locomotion. All six legs and the two pairs of wings are attached here. The trochanter and coxa serve as hinges between the legs and the body of the insects. They allow for the rapid running movement of tiger beetles. The length of the femur and tibia also help with running speed. Various spurs on the legs are used for grooming, traction against the ground, and perhaps protection from enemies. The tarsi contact the ground and help propel the beetle forward when running. The hard fore-wings (elytra) serve as protective covers for the clear hind wings that are folded under them when at rest. In flight the elytra are extended forward at right angles to the body and the hind wings are unfolded to their full lengths. Each species of tiger beetle has different-colored elytra that are used for camouflage and for reflecting heat.

This part of the insect body is made up of many segments, and it contains the organs for digestion, breathing, and reproduction. On tiger beetles it also holds the large ears that can hear high-frequency sounds such as those made by bats.

Now you know the parts of a tiger beetle. Next explore these beetles up-close and in detail. Just click on any of the beetles below to open the viewer window. If you want to see more, you can visit the expanded Tiger Beetle Zoom Gallery.

In case you are wondering why there are grey lines on each image, they are used to show the size of each tiger beetle. Microscopists call these lines scale bars, because they let a person know the size of an object. All the grey lines below are equal to 5 millimeters, or half a centimeter. 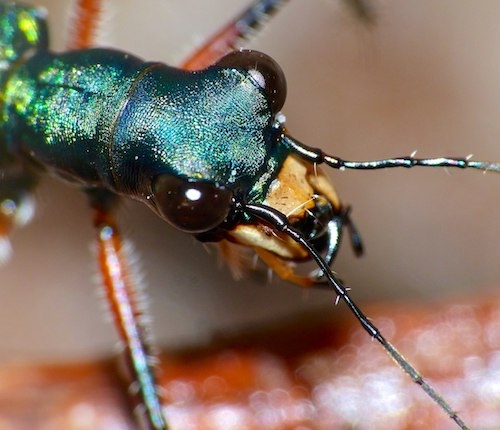 Take a close look at these amazing insects in the Tiger Beetle Zoom Gallery.