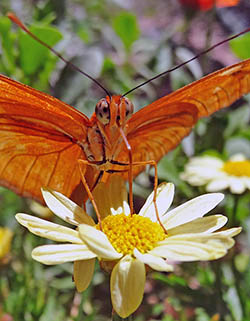 It’s a warm day and you are on a walk in the local park. You see a large colorful butterfly as it floats out of the shade and onto a sunlit flower. It pauses, uncurls its long tongue and sips some nectar before it flutters off to the next flower. This may seem like the perfect relaxing life, but being an insect is hard and dangerous work.

Like other insects, butterflies are under constant stress. They have many decisions to make that can be a matter of life and death. On which plant should I lay my egg?  Where will I get my next meal of nectar?  Can I make it across this open area without being eaten by a swooping kingbird?

A butterfly's life may be difficult, but there are other insects that have an even harder time surviving.

Life of a Tiger Beetle

You might think an insect named tiger beetle would be a top predator, like tigers in the jungle. But that isn't the case. These insects live on the edge of danger, always trying to escape being eaten. You can find them around the world and in almost any kind of habitat. If you look carefully you will see them in the deserts, rain forests, ocean beaches, and mountain tops. Even in the harshest habitats, these insects seem to live in the riskiest areas possible. 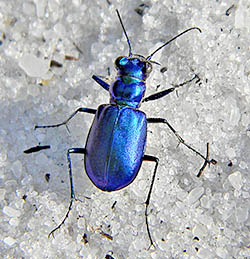 Most of the 2760 tiger beetle species live on the ground where they run and stop and run and stop in search of the tiny insects and spiders they eat. The males are in a constant search for females, and the females try to avoid or get rid of the males. When it gets too hot, the tiger beetles have to find shade in a hurry so they can cool down. To make matters worse, running, stopping, mating, and the heat aren't their only worries. They also have to avoid the many birds, lizards, spiders, and hungry flies that are waiting to eat them.

In order to survive in risky areas, the behavior and physiology of tiger beetles is adapted for living in extreme and dangerous places. If you take the time to watch these insects you will see they are constantly using tricks to fool their enemies, sneak up on their food, and keep their bodies from overheating. They also provide scientists with important information about the places where they live. This information can be used to indicate if the environments they live in are in danger. 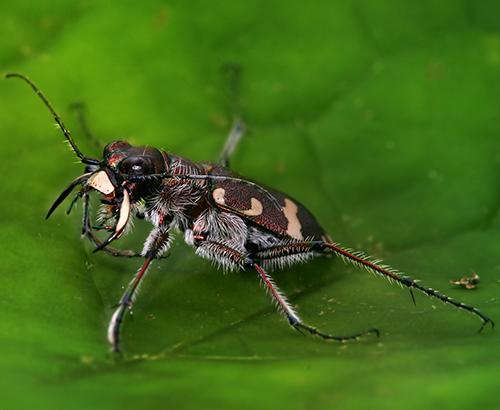 Learn the tricks some beetle larvae use to wheel across the sand in our story, Larval Beetles Spin Their Wheels on the Beach.