Cyanide: a chemical that has a special carbon-nitrogen group and is usually toxic.

How Tiger Beetles Have Adjusted to Different Environments

Tiger beetles have long, thin legs that help them move across the ground at incredible speeds. One species in the deserts of Australia can run so fast it is considered one of the quickest insects in the world. Often a tiger beetle runs so fast chasing prey, its eyes can’t process the changing images fast enough. The tiger beetle becomes blind for a few seconds, so it has to stop and let its brain tell its eyes where its body is now. Then it has to relocate its moving prey. That means a tiny insect being chased by a tiger beetle can escape sometimes if it just doesn’t move. 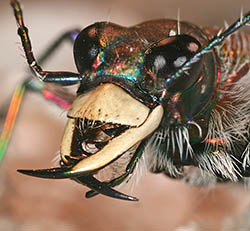 If you are a tiny insect beware of these jaws. Click on the image to enlarge.

Adaptations - Who Is Going to Eat You? 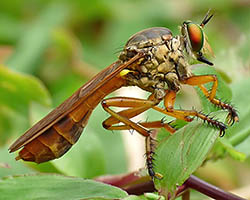 Robber fly perched on a leaf waiting for the perfect prey. Image by Jeevan Jose via Wikimedia Commons. Click to enlarge and more information.

The long legs of tiger beetles help them run away from some enemies like robber flies. These flies swoop up from a perch to catch flying insects out of the air. As long as a tiger beetle can run along the ground, it can get away from the robber fly easily. But sometimes tiger beetles are chased by faster predators like lizards. Then the tiger beetle uses a secret weapon. They extend their hidden flight wings and take to the air. Most tiger beetles don’t fly more than 20 or 30 feet, but it is enough to get out of the way of a lizard. But what attacker waits to grab them in flight? You guessed it, the robber fly. To run or not to run? How does the poor tiger beetle know which decision to make?

If a beetle chooses not to run, they have a few other tricks they can try to avoid being eaten. Many tiger beetles have colors that match the ground on which they run. This camouflage makes it harder for some enemies to see them. Other tiger beetles have a pattern of stripes and blotches on their backs that make it hard for some enemies to recognize them as an insect. If tricks on the eye don't work, simply being the wrong size can have its benefits. Some tiger beetles are too big for spiders and robber flies to handle. The small size of other tiger beetles makes them too small of a meal for birds to waste energy chasing them. 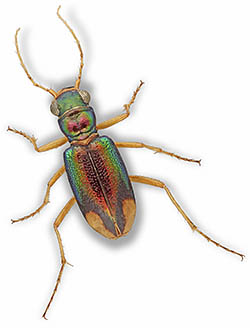 Some tiger beetles make poisonous chemicals and display warning colors to other animals not to eat them. This Carolina Metallic tiger beetle, Tetracha carolina, produces cyanide that can make an animal sick or kill it if they decide to eat them.

For some tiger beetles, avoiding or running from predators isn't enough. These beetles can get a little scary. They make poison called cyanide that can be released onto the mouth of a predator. Few animals, including people, can eat cyanide without getting sick. It can even kill small predators. Many of the tiger beetles that use cyanide for protection also have bright orange body parts. Even predators that aren't the smartest can learn to recognize that bright orange patches aren't to be messed with. These predators will remember that the last time they tried to eat something bright orange, they ended up with a mouth full of bad tasting stuff. They may have even had to throw up.

The dangers that tiger beetles face every day quickly add up. Besides avoiding fights with neighbors and not being eaten, they must control the temperature of their bodies – not too hot and not too cold. Because the habitats where most tiger beetle species live are on the ground and exposed to the sun, temperatures can get very high. Why do tiger beetles choose to live in such hot places? Like most insects, tiger beetles have to use the sun and heated soil to warm up and to move around. They don’t have natural heaters and air conditioners inside their bodies like we do. If they need to run down prey, find a mate, or escape a predator, they can’t do it when they are cold. They would be moving in slow motion or no motion at all. But these hot habitats can easily get too hot and can even kill them. 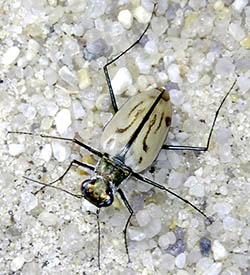 Northeastern Beach Tiger Beetle (Habroscelimorpha dorsalis) with its light colored back helps to reflect the heat from the sun. Click to enlarge and for more information.

Tiger beetles in hot, sandy areas often have backs that are a whitish color. White bounces off more of the heat from the sun than a darker color. Most tiger beetles have lots of white hairs on the underside of their bodies. These hairs stop much of the heat coming up from the sand.

Because the surface of the soil is always much hotter than the air just above it, the tiger beetles can stand on their tip toes and use their long legs like stilts to hold their bodies up in the cooler air. They can also turn and face the sun so that only the front parts of their heads are getting the direct rays of the sun.

More than anything else though, tiger beetles choose where, how, and when to move. This helps them control how warm or cold they end up. Sometimes they have to move in and out of the cooler shade of low plants to adjust their body temperatures. If all else fails, they may have to burrow deep down into the cooler and wetter sand during the middle of the day and wait for the cooler evening temperatures before they can be active again. 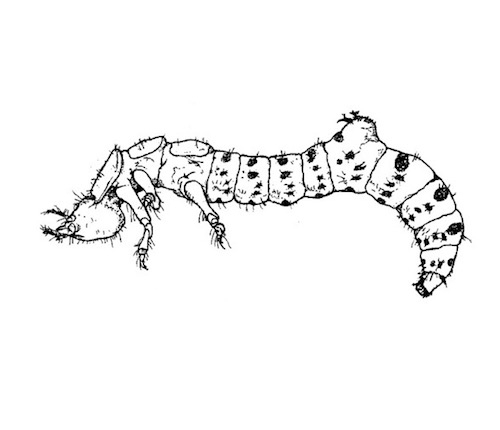 When some tiger beetles are still larvae, they have a special adaptation to help avoid being eaten. Learn how larvae ride the wind in the tiger beetle PLOSable story.