Enantiomer: one of a pair of molecules that are mirror images of each other, but not identical... more

Hydrophobic: any molecule or object that does not mix or repels water... more 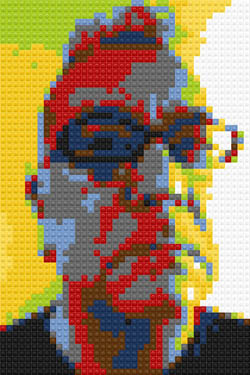 Proteins are not the same as Lego building blocks, but proteins do have special shapes that can be used to build parts of the body. Johnson Righeira Lego portrait via Wikimedia. Click the image to see full size.

To build a protein, first the amino acids are connected into long chains. These chains of amino acid building blocks can then fold into all types of shapes. Some chains fold into spirals. Other chains make zigzag sheets, and loops.

Combining these spirals, sheets, and loops is how the three-dimensional shape of the protein is made. You can also combine multiple strands of amino acids to make even bigger protein shapes.

The human body uses just 21 amino acids to make all the proteins it needs to function and grow. Because amino acids can be arranged in many different combinations, it's possible for your body to make thousands of different kinds of proteins from just the same 21 amino acids. You may see books that say there are only 20 amino acids. Don't worry, that's just because the 21st one was discovered pretty recently and not all the books have caught up yet.

21 Amino Acids. Click on the image to see a a larger version.

There are nine amino acids that your body can’t make. They are called essential amino acids, meaning you must have them to live. They are found in foods like milk, eggs and meat and also a wide variety of plants. This is part of why you can’t survive on a diet of just corn chips for very long. Essential amino acids were actually discovered in an experiment testing something very similar to a "corn chip diet".

Scientists fed rats a diet that had only corn protein in it and observed the results. What they noticed was that rats on this diet got sick and would eventually die. When the sick rats were fed protein from milk, however, they would get better. This told the scientists that something in milk protein was essential to health of rats, that it was something they couldn't live without.

Where Do Amino Acids Come From?

Just like a Lego house built with Lego bricks can be taken apart, and the bricks used to build something completely different (like a really cool T-Rex), your body can take apart the amino acid building blocks that make up protein and re-use these to make new, totally different proteins. Even your body knows that recycling is really cool!

Two versions of the amino acid alanine. Each is the mirror image of the other. Click to image to learn more.