Send In the Clones 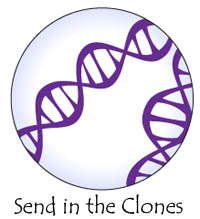 Would a clone of yourself actually be you? People might tell you that you have your mother's eyes or your father's smile, or that your sister looks just like you did at her age. Why is that? You know that you are different in some ways from everyone in your family, but the fact remains that children look like their parents, just like you look like yours.

Those genes came to you when your mother's egg fused with your father's sperm. Egg and sperm are specialized cells for reproduction. These cells are called gametes. Gametes only contain half of the amount of DNA a cell must have to live. This is because they eventually come together and mix their DNA. The process of egg and sperm joining is called fertilization.

These cells only exist in special parts of the body used for reproduction. The rest of your body is made up of cells that have the entire DNA they must have to live. Those cells that are found outside the reproductive organs are called somatic cells. This word is easy to remember if you know that soma means body in another language.

When an egg is fertilized with a sperm and the DNA mixes, the cell starts dividing. Dividing cells is the way we grow from one cell to many trillion cells, which is what you are right now. Sometimes, the dividing mass of cells splits into two masses of cells. Both masses keep dividing. The cells all have the same DNA. The two eventually grow into two kids with the same DNA. They are then known as identical twins.

These kids have the exact same DNA, which is exactly what a clone is. Yes, we already have human clones walking among us! Amazing right? Perhaps you know some identical twins? If you do, you might know that they might look the same, but they are very unique people in many ways. That is why a clone of you might not be you at all in the end. They might just be a separate, unique and beautiful person, like you, but different.

Would a clone of you really be you?