The Story of Dolly 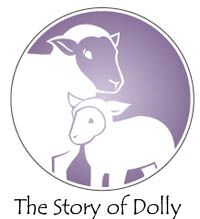 Dolly is the name of a sheep that has the honor of being the first mammal to be cloned by a group of scientists in Scotland. Dolly was born July 5th, 1996 and she passed away in 2003. She lived for 6 and a half years, as a normal, active ewe. She was not that normal though, she was a clone after all.

There are several breeds of sheep in the world. The sheep we focus on here are easy to remember though. One breed of sheep is the Scottish Blackface and the other is a Finn Dorset. What is easy about those names is that the Blackface actually has a black face. The Finn Dorset is all white. You know that the genetic material in our cells determines how we look on the outside. The black face of the Blackface sheep is determined by its genetic material, which means you can check to see who has that genetic material by just looking at their face! Very easy!

How Dolly Was Made

Steps for making Dolly the sheep. 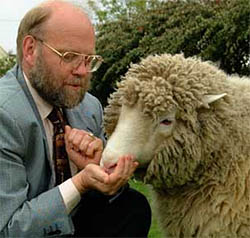 The story was first published as a short report in a scientific journal called Nature, Volume 385, 1997, pages 810-812. Since that time, attempts at cloning at least 10 species of mammals have been made. Only seven attempts have been successful; cows, sheep, goats, mice, pigs, cats, and rabbits. The rate of success is very low.

Several questions are brought up by Dolly's life and death. Scientists were interested to see if she aged faster because the genetic material was older than that from a fertilized egg. It was thought that she was aging faster, but no one could be sure. Dolly's cells looked a little older in a region in the genetic material, but is that enough to cause premature aging? Dolly got arthritis, a disease that mainly affects older individuals, but again, no one could be sure if it was because she was a clone. Some animals get arthritis early in life. Dolly even gave birth to a daughter, who was completely normal in all ways. Dolly led an active, healthy, sheep life until she passed away.

Dolly got severely sick with a lung infection that affects many sheep. Scientists decided to put her down, euthanize her, to end her suffering. Dolly passed away when she was six and a half years old. That is half the average lifespan for a Finn Dorset sheep. She is now stuffed and on display in Edinborough, Scotland. We learned a lot from Dolly while she was alive and when she had passed away, but she might have left many more questions than answers. 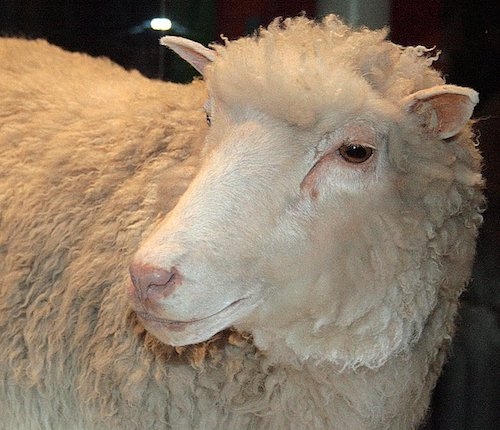 Dolly the sheep on display at the National Museum of Scotland. Image by Toni Barros via Wikimedia Commons.