Photon: the smallest bit of light.

Why Do We Have Seasons? 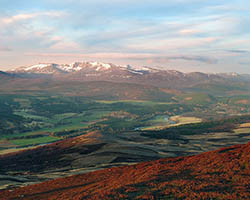 In spring, the cold of winter fades away and the plants start to bloom. Click for more detail.

It's spring. The frost of winter has slowly melted under the warming skies and the flowers are in full bloom. But spring doesn’t last forever. In a few months, temperatures will soar as summer arrives. Then, the temperature will slowly cool again through autumn before the land chills back down to winter.

Many parts of the world experience seasons as a normal part of life. But why does the Earth have seasons?

Imagine running a pole through the center of the Earth from the most Southern point to the most Northern point. Instead of standing straight up and down, the pole sits at an angle. Every day, the Earth revolves once around this tilted pole, which is also called an axis. 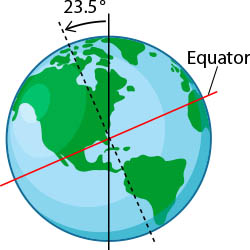 The dotted line shows the axis of the Earth, which is not straight up and down, but at a 23.5 degree angle.

Summers can get so hot that you can feel like you're melting. Winters can get so cold that you feel like a human popsicle. Can the tilt of the Earth really be responsible for such extreme changes in the weather? Yes, it can.

First, let's talk about sunlight. Light from the sun is made up of tiny particles called photons. When a stream of photons, or sunlight, travels from the sun to any surface on Earth, it heats up that surface. That's why our skin grows hotter when we stand out under the sun. This is also why the ground heats up when the sun's out.

However, you warm up faster if you stand under the sun during the summer than during the winter. The reason for this has to do with the angle at which sunlight hits the Earth during each season. 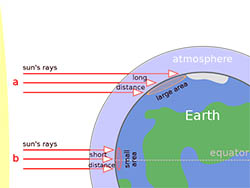 Land closer to the poles gets spread across more area, so the sunlight is less intense. Click for more detail.

Sunlight that reaches the Earth's surface works in the same way. Think about how your location moves in relation to the sun every day. When the sun is directly overhead, photons land closer together and deliver more heat. This is why it’s so easy to warm up during midday. When the sun is on the horizon, photons land far apart. The spread of those photons delivers less heat to your location, which is why it’s harder to warm up at sunrise and sunset.

In June, when the Northern Hemisphere is leaning toward the sun, the Northern Hemisphere receives direct streams of sunlight and experiences the hot temperatures of summer. Knowing this, do you think the Southern Hemisphere experiences summer in June or December?
Why do you think that places near the equator are always hot and places near the poles are always cold? The answer is, once again, because of the Earth's tilt. Throughout the year, land on and near the equator always receives a lot of direct sunlight. Meanwhile, land on or by the poles receive sunlight from a low angle. Because the poles never receive direct sunlight, they can never warm up very much even during summers, when the sun never sets. Learn more about the Earth's tilt with The Seasons. 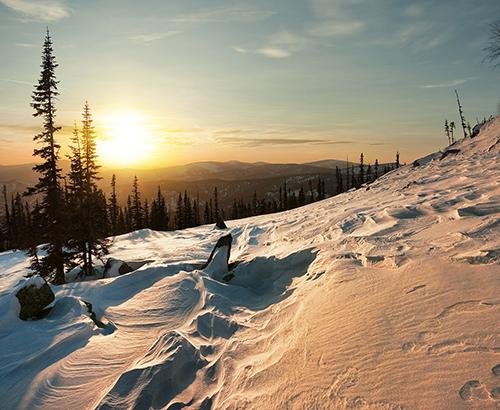 Explore hands-on why there are seasons with our classroom activity Seasoned to the Tilt.