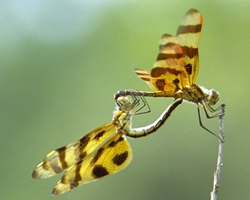 A male Halloween pennant dragonfly is clasping the neck of a female. She moved her abdomen under him to pick up a sperm packet. Image by cotinis via Flickr.

When we think about organisms mating, often we think of animals around us—humans, dogs, dragonflies, cats, lizards, or maybe birds. When these animals mate with each other, the egg and sperm meet inside the body, not outside in the air or water.

Internal fertilization evolved as a part of the move onto land, as many gametes can't float through the air in the same way they float through water. Though they usually meet in the female, in some kinds of animals, the egg and sperm meet inside the male. Most sperm are motile, meaning they can swim around in the body, to search for an egg to fuse with. 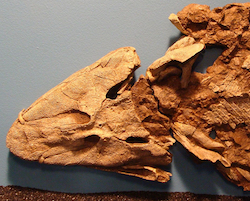 Life first started in the oceans and for a long time, reproduction happened in the water. Click for more detail.

With internal fertilization, either sex may have sex organs that can help sperm and egg meet. In mammals, an organ called a penis is inserted in the female vagina. Most male insects also have a long organ called an aedeagus that works a lot like a penis. In a special kind of insect called Neotrogla, the roles are reversed. The female has a sort of penis called a gynosome that moves sperm out of the male. Most female insects, and some other kinds of animals, have a special sperm-storing organ called a spermatheca. The spermatheca can store sperm for many years and use it as it’s needed.

Spiders do things a little differently. The male has a special tube on each of a pair of fancy legs called pedipalps. He uses the tube to hold sperm and move it to the female spider who has a spermatheca like an insect.

A few male birds have a penis and male reptiles have hemipenes (two penises). Female reptiles and birds have an opening called a cloaca. But in many bird species, the male has a cloaca too. Sperm is transferred to the female by an activity called the ‘cloacal kiss’, in which the male and a female rub their cloacae together to transfer sperm. 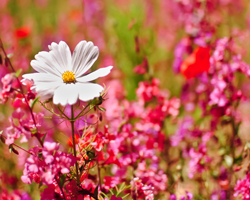 Most sexual plants use internal fertilization to reproduce. Image by Anirudh Rao on Flickr.

In plants, sperm and egg meet inside the ovary. Sperm comes from pollen, which is small and light, and can travel through the air or water. But, plants can also have sex organs that help sperm and egg meet. Flower petals attract pollinators, and a flower part called the stigma catches the pollen, and funnels it to the ovary. 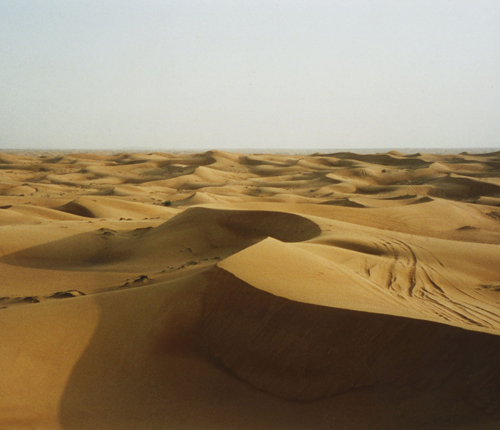 Internal fertilization developed in part as a way to protect eggs and sperm from drying out on land.