Stridulate: to make a sound by rubbing body parts together; usually associated with the sounds insects make. 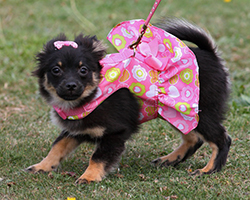 Some humans like flashy outfits so much, they make other species wear them as well. Image by Denise Coyle from Pixabay.

When you have a crush on someone, what do you do? Maybe you show off in front of them so they think you’re cool. Maybe you bake them brownies, or try to make them laugh, or wear something flashy so they notice you. Whatever it is, it’s something that says, “Hey! I’m the best! Choose me!”

Other animals also have creative ways of getting their crushes to notice them. Using crazy features, bright colors, shows of strength, rhythmic sounds, and special smells, they go all out to impress future mates. Humans have complex social behaviors, and females might show off as much as males do. But in most animals, males are usually the showy ones. 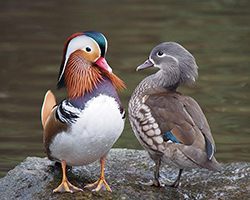 If coloration is different between the sexes in a species, males are usually more showy. Click for more detail.

Males are usually showy because females often spend more time and energy for every egg they make, compared to the energy males use to make one sperm. Because eggs are full of nutrients and so much bigger than sperm, a female makes fewer eggs in her lifetime than a male makes sperm. Sperm are so much tinier and easier to make, that just one male can make enough sperm to fertilize all the eggs that are available to be fertilized by all the females in the area.

Females are also usually more busy with childcare than males. Some female animals have to wait for the babies to develop in their bodies, and then take care of them for even longer after they are born. Altogether, in most species, fewer females are available to mate at any given point in time. This means males may end up going to extreme lengths to catch the eye of a few choosy females. 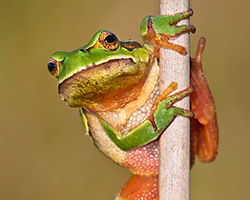 The songs of male European treefrogs reflect their quality as a mate. Image by Paulo Brandao.

Animals don’t just show off for attention. The ways they show off are usually honest signals of their quality. Female birds tend to like males with the brightest colors, longest feathers, and the most complicated songs. But, only the healthiest males put on a good show. A male bird’s color and brain development depends on his health. A good performance shows that the male is good at getting food, is strong, or is good at not getting sick – all traits that a female would want her offspring to have too.

Honest signals of quality are not just important for birds. Male European treefrogs also croak songs to attract mates. The most popular males have offspring that grow faster and to a larger size than the offspring of less popular males. In a certain species of guppy, females prefer males with brighter orange spots, because it means they are better at finding high quality food. For the fifteen-spined stickleback fish, females like a man who can shimmy. The faster he shakes and fans with his fins during his mating dance, the better he is at parenting. 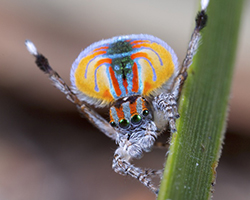 Animals have many different ways of catching the eye of their beloved. Birds have the benefit of feathers, which can have fancy shapes, complicated patterns, or bright colors. Jumping spiders do difficult dances where they might wave their legs like batons and vibrate their bodies. These males also show off bright colors like reds, greens, and blues. Some male lizards have bright colors and do push-ups to show off their might. Male squid may follow females while blinking through dark and light patterns with their color-changing skin. Many animals sing songs to attract mates. Birds, frogs, cicadas, and crickets are animals that sing, croak, or stridulate to show off. Their sounds fill summer nights as males advertise their health or size.

In a few animals, the females are the flashy ones. One example is the pipefish, which is related to the seahorse. In pipefish, like in seahorses, the males are the ones that spend more time caring for young. The males have pouches where they hold their fertilized eggs as they grow. Because the males have less time to mate than the females, they are choosier. The male pipefish like females that have more dramatic-looking stripes. 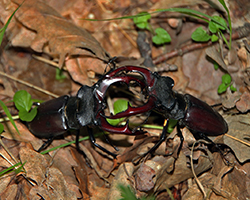 These stag beetles compete by fighting. Click for more detail.

In many animals, males compete with each other. These competitions are usually not meant to kill the other males, but to show who is the strongest. Some reptiles will wrestle, giraffes will hit each other with their long necks, and deer and other horned animals will knock antlers. Many beetles also have horns for battle. Male dung beetles have big horns that they use to push other males out of female’s burrow. The one with the longer horn usually wins. Some types of weevils have long, slender mouths called rostrums that they can use for fighting. Male weevils will knock their opponents off branches with their rostrum.

Most humans love to give and get gifts, and it turns out, some other animals do too! Most animal gifts involve food, and insects are big gift-givers. Empid fly and hangingfly males bring females gifts of food. In hanging flies, the bigger the meal they bring, the longer the female will mate with them. In one type of fruit fly, males throw up a drop of food for females to snack on. The males who give bigger and more nutritious drops get the female’s attention for longer. Some insect males make packets of food called spermatophylax that are attached to their sperm. The female snacks on the spermatophylax, while the sperm fertilizes her eggs. 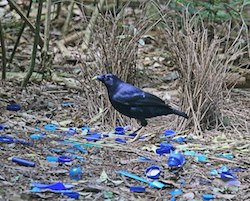 This is a bowerbird. It builds beautiful sculptures filled with colorful plastic, flowers, or berries for female birds to sit in. Their building skills are an honest signal of male quality. Males with the least parasites build the most complex structures. Image by Joseph C Boone.

Other animals give food gifts too. Eurasian Jay birds give their partners food when they court each other, and to strengthen their bond. The male brings the female different kinds of food depending on what she’s hungry for. Later the male brings the female food as she sits on their eggs. Researchers think that some dolphins might give sea sponges as gifts. Males tear them off rocks and carry them to a female. Because dolphins sometimes throw the sponges at the female too, scientists also wonder if it’s a scare tactic.

Many male and female animals produce smelly chemicals called pheromones. The smells are meant to tell partners about their health, where they are located, and that they are ready to mate. Insects use pheromones a lot, and they can sense the chemicals with their antennae. That’s why male moths have large feather-like antenna – to better pick up female moth’s scent. Other animals produce pheromones in their sweat, urine, spit, tears, and special glands around their body. A male lemur will rub scent from glands on his wrists onto his tail. His scent shows off his health.

These creative ways of catching choosy mates can cost a lot of time and energy. But reproduction is so important in the lives of animals, that they don’t mind doing the work to attract a healthy mate. 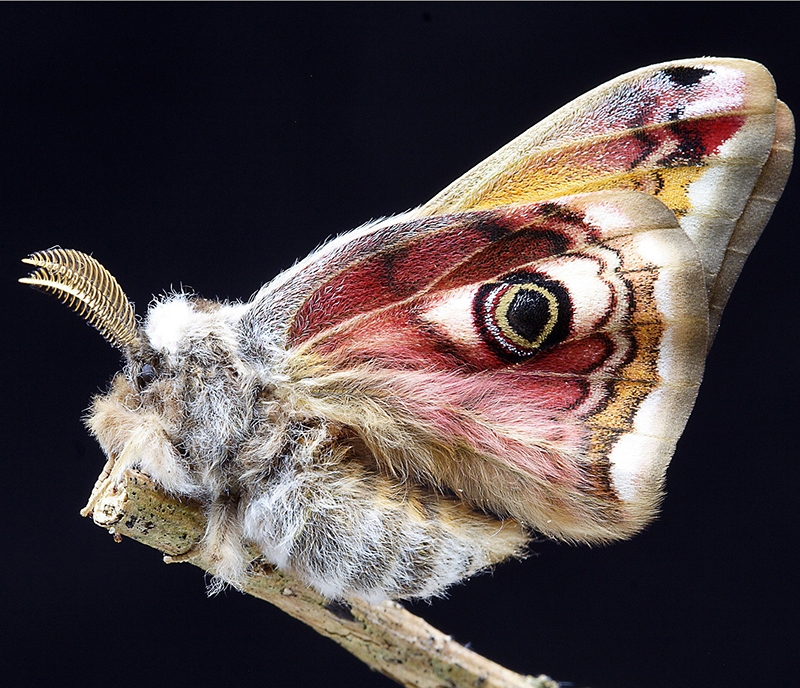 Some male moths have very complex antennae, to help them detect pheromones given off by females.