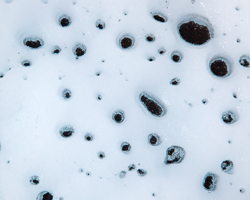 Holes and puddles can form in glaciers from dark dust gathering and absorbing heat, melting the ice. Some tardigrades live in these cold waters. Image by Joseph Dsilva.

Have you ever put a fruit or vegetable in the freezer? Did you notice how, when you thawed it out later, it was all mushy? That’s because when water freezes, it usually takes up more space, and sometimes forms sharp ice crystals. If you’ve ever seen frost on a window, you can picture how sharp these ice crystals can get. When water freezes inside a living thing, it can break apart cells. Liquid leaks out of the cells, and the plant or animal dies.

But some tardigrades can be in a freezing cold place without freezing. Some can even freeze without getting mushy. The power to freeze solid and then thaw back to life is called cryobiosis. This word comes from the Ancient Greek words krúos meaning icy cold, and bíos meaning life.

Tardigrades are super-cool, but some can also “supercool.” Supercooling means cooling down past 0°C – the normal temperature at which ice freezes. An animal that supercools can keep the water inside them liquid, even as the world around them starts to freeze. If ice crystals start to grow, they grow slowly and stay small. 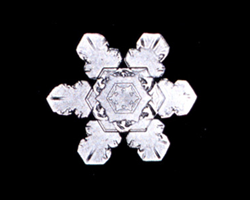 Snowflakes are made of water that has formed around a piece of dust. Tardigrades might control the formation of ice crystals in their body to make the ice smaller and less damaging. Image by William Bentley.

When tardigrades do freeze, scientists aren’t sure how they do it without getting hurt. One idea is that their cells are protected from breaking as they freeze. Another idea is that when ice grows inside the tardigrade, it’s controlled so that it doesn’t hurt the cells. They might keep the ice crystals very small and shaped in a way that doesn’t do too much damage.

Scientists think this ability to freeze may be linked to the ability to dry up. Small aquatic creatures like tardigrades need to be covered in water to live, but some can shut down as they dry out, instead of dying. Tardigrades that survive drying are also able to survive freezing. It could be that the same protective processes are important for waking up from both extremes. But how they work is a mystery still waiting to be solved! 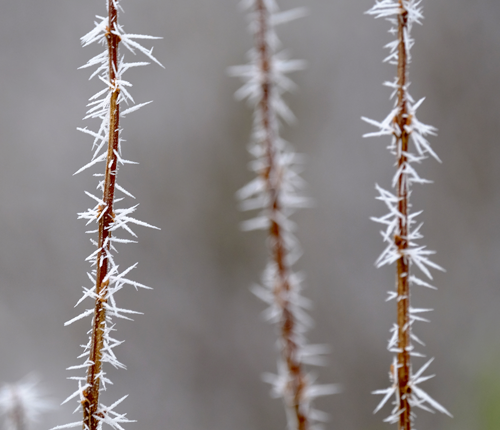 Ice can be sharp. How do frozen tardigrades keep from being cut?