Unfertilized: when an egg does not join with male genetic material to make a baby.

Life as a Tardigrade

Every animal starts life off little. This is especially true for tiny tardigrades! They have three life stages – egg, juvenile, and adult. 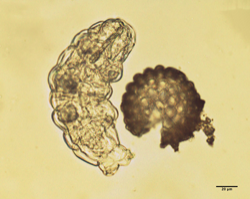 This tardigrade just hatched out of its egg! An egg is the round thing on the right. Image by Don Loarie.

Tardigrade eggs are round and can be covered in strange and spikey shapes. When the egg hatches, out comes a small tardigrade. This part of their life is called the juvenile stage. Juvenile tardigrades work hard to eat and grow to an adult size. To grow larger, tardigrades molt. That means they grow a new and bigger skin, then shed their old one. Depending on the species, tardigrades will molt four to twelve times. When they molt as adults, tardigrades will often lay their eggs inside their old molt to help protect them.

In a comfortable and wet habitat, a tardigrade can live between three months and two and a half years. Tardigrades that go into protective sleep, or get frozen in ice, can live as long as ten to thirty years.

Dealing with the Seasons

Through the year, as seasons change, the water that tardigrades live in can become uncomfortably warm or cold. Sometimes, changes in temperature mean there isn’t enough air in the water for the tardigrade to breathe. To prepare for these changes, some kinds of tardigrades make a tough outer shell called a cyst (pronounced like “sist”). In the cyst, they rest and save energy until things get better.

The tardigrade makes a cyst by shedding its skin two or three times without swimming out of it. The skins build up, one inside the other, like layers of an onion. As the old skin toughens around it, the tardigrade curls up and goes to sleep. It stops moving and uses less energy, and slowly uses the food and fat stored in its body. When the temperature is nice again, it cracks through the cyst and leaves it behind.

This drawing shows the stages of a tardigrade making a cyst. Click for more detail.

A cyst is not as extreme as other tardigrade survival tricks. But, it’s an important part of the yearly life cycle for certain species. 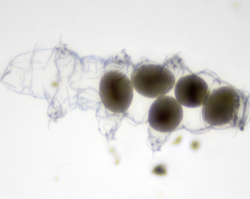 This is a female tardigrade's molt (her old skin) with eggs laid in it. Image by Specious Reasons. 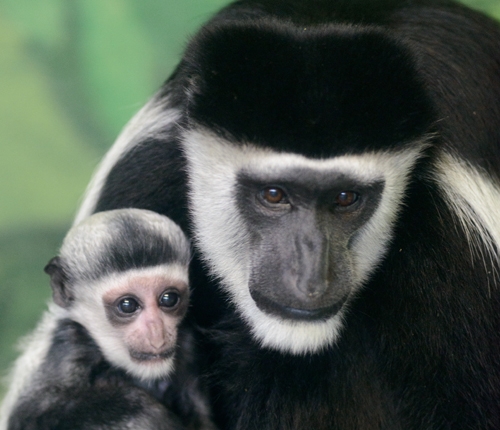 Many young animals look like mini versions of their parents, like in these colobus monkeys. The same is true for tardigrades.