One moment you’re crawling from leaf to leaf on a wet twig of moss in a sunlit patch of forest. The next moment, your whole world starts closing in around you. Water starts drying up, and you find yourself in a shrinking prison. Stuck in the water drop, what does an aquatic creature do? Well, tardigrades dry up too, right along with the water. They wrinkle up and go into a deep lifeless sleep, in a survival trick called anhydrobiosis.

When lakes dry up, the fish can swim away to wetter parts. When a tardigrade's moss dries up, it has nowhere to swim! Image by Jake.

The word anhydrobiosis is made from the Ancient Greek words hydro meaning water, bíos meaning life, and the prefix an- meaning not. Anhydrobiosis is life without water.

The First Step of Anhydrobiosis 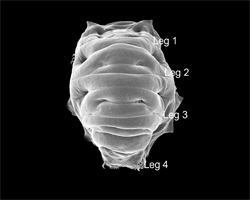 Scanning Electron Microscope image of a tardigrade in a tun. Notice how it pulls in its legs. Four of the legs are labeled. Can you see the claws? Image by Jørgensen Møbjerg.

As the water around them dries, the first thing a tardigrade does is fold into a ball called a tun. The tardigrade becomes wrinkled like a raisin. Wax is squeezed out of the body and covers the tardigrade to slow down water loss. This gives it time to make special particles that protect it for the next step: losing nearly all the water from its body.

How Do Tardigrades Survive Drying Out?

Water is important for life. Cells and molecules depend on water to keep their shape, and the chemical reactions that keep you alive are meant to happen in water. Proteins are special molecules that carry out very specific jobs, build new cells, and keep you alive. Most proteins need water to work. Without water, they bend into the wrong shape and stick together.

To protect their proteins, tardigrades basically turn their insides into glass. The body replaces any water left with a new and special protein that sticks to itself and hardens. The tardigrade’s cells and other proteins get held in place and in the correct shape. This protects the proteins from denaturing (that is - losing their shape) as the tardigrade dries out. Some tardigrades also make special sugars that help them be more glass-like.

These proteins and sugars protect the tardigrade, but also stop its body in time. The shut-down cells can’t do the work that is necessary for life. That’s why a tardigrade in anhydrobiosis is said to be nearly dead.

How Long Can Tardigrades Sleep?

How long a tardigrade survives drying up depends on the species and where they live. Frozen tardigrades have been revived after 30 years. Tardigrades in warmer places can’t survive as long. Scientists think non-frozen tardigrades can only survive up to ten years. However, there are a lot of different species of tardigrades, and some have barely been studied. There may be one out there that can survive for a lot longer. 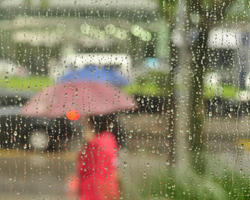 Eventually, rain will come and wet the tardigrades. Image by Taylor Shieh.

DNA is a molecule that is found in most cells. It’s like the instruction manual for running the body, and if a cell’s DNA gets very damaged, the cell might die. DNA is easily damaged, so the body has ways of checking and fixing it. When the tardigrade body dries out and shuts down, its way of fixing DNA is also shut down. The damage builds up over the years.

When the tardigrade’s environment fills with water again, it starts to wake up. Right away, the body starts to fix damaged DNA. But the longer the shut down, the more there is to fix. If it’s been too long, the DNA may be too broken to be repaired. Cold temperatures can help slow damage to tardigrade DNA. 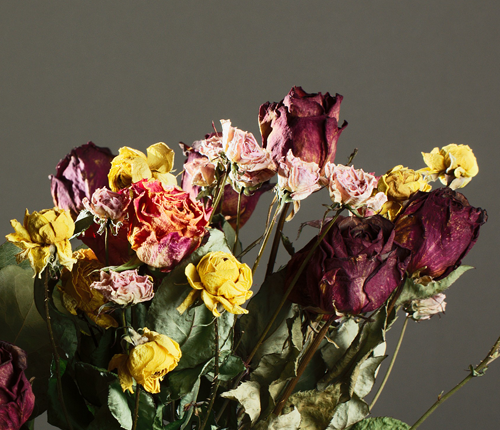 These dried roses are dead, but when tardigrades dry up, they stay alive. How are they so tough?