Extremophile: an organism that prefers to live in an extreme environment.

Indestructible: impossible to damage or destroy.

Meltwater: water that melted off a glacier.

Phylum: a grouping of living things that is very broad. Humans are in the animal phylum “Chordata,” which includes everything from fish to reptiles, birds, and mammals....more 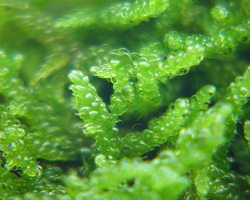 This moss, Hypnum cupressiforme is a great habitat for tardigrades. The shape of the leaves makes it good at trapping water. Image by Kurt Stueber

Walking through a forest, you bend to pet a moss-covered boulder with your hand. A thin layer of water from the moss’ teeny-tiny leaves wets your fingers. If you were to shrink yourself down small enough, so that each moss leaf looks like an airplane wing, you’d be in a whole new world. At that size, water looks like a thick gel that, after a rain, would cover everything in a see-through barrier. Moving through that layer of water as if it were moving under a blanket, you’d find it. The cute, the clumsy, the nearly indestructible…the tardigrade.

What is a Tardigrade?

Tardigrades are micro-animals that look like a cross between a badger and a caterpillar, and move like they’re made of jelly. They are so small that you need a microscope to truly appreciate them; most are smaller than a dot made with a pencil. They have potato-shaped bodies, stumpy legs, and a clumsy walk. Because of their lumpy shape, some people call them “moss piglets” or “water bears”.

However, tardigrades are very different from pigs or bears. Scientists who study how animals are related found that tardigrades are more like insects than pigs, bears, or potatoes. But, they definitely aren’t insects. They are so different from any animal out there, that they have been given their own group name: the phylum Tardigrada. About 1,000 species of tardigrades are known to science, and experts think there are at least 10,000 more to discover! 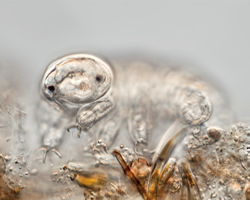 A tardigrade looks straight at the camera (or, microscope lens) in this photo by Frank Fox.

Tardigrades are aquatic, which means that they need to be surrounded by water to live. Some species live in bodies of water like oceans, seas, lakes, or ponds. Because tardigrades are so small, they stay in places where they can’t be swept away by a strong current. You might find them between grains of sand, among water plants called algae, or living inside barnacles.

Being a small aquatic creature has its perks. Just a little bit of water is all they need to make a home. That’s why many species of water bears live on land. Some live in the watery layer that forms between dead tree leaves on a forest floor. Many live in mosses or lichens that trap water between their leaves and ruffles. Because they are not too fussy, they can be found all over the world. They live in lichen in the Arizona desert, and in moss in parking lots in Japan.

As you might already know, tardigrades are kind of famous. Scientists have been charmed by tardigrades because they can survive conditions that are very hot, cold, or dry. Scientist have even flown them through the vacuum of space. They hope to find out the secrets of tardigrade toughness, and use it to make medicines or to toughen up human cells. 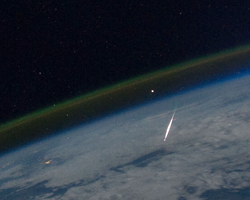 Tardigrades have been flown as far as "Low Earth Orbit" (LEO). That's how far up this photo was taken, from the International Space Station (ISS) Expedition 28 crew. Can you spot the shooting star?

Tardigrades that live on land are the best at surviving extreme conditions. Mosses and leaves often dry out, leaving tardigrades with no water. Some tardigrades can also survive in places that freeze from time to time. You might find them in moss along a stream in Greenland, or in meltwater on Antarctic glaciers.

But, these water bears are not extremophiles. Extremophiles are things that like extreme habitats. But tardigrades can only survive them. Tardigrades that stay dry or frozen for too long will eventually die.

When you’re uncomfortably cold or hot, how do you deal with it? Maybe you put on a sweater, or drink some warm or cold water, or talk about it. Or maybe you get out of the situation, move indoors, or try to distract yourself.

This kind of thing would kill most animals. If you were to dry up or freeze like a tardigrade, your cells would break apart beyond repair. But tardigrades have mastered the art of self-protection.

As the environment turns harsh, their bodies make particles that protect their cells. Then, as they’re freezing or drying up, they basically go into such a deep sleep that they’re nearly dead. In a few weeks or years, when the environment is back to being wet and un-frozen, they slowly awake. Their bodies fix the damage that occurred during sleep, and they wake up without (it seems) having aged a single day. This deep-sleep superpower is called cryptobiosis. The word cryptobiosis comes from the Ancient Greek words kruptós meaning secret or hidden, and bíos meaning life. 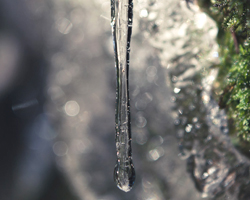 Could this ice have tardi-popsicles in it? Some species of tardigrades can survive freezing in ice. Image by Robert Jenssen.

Some tardigrades, when in their cryptobiotic sleep, can survive boiling temperatures for up to an hour. They can also survive being frozen to nearly three times colder than the coldest temperature ever recorded on earth's surface. Some have even been blasted with fifty times the radiation that would kill a human, or squeezed at a pressure one thousand times harder than a very hard fist punch. When they woke up, these cute little creatures just went on living, like nothing even happened. This sleeping superpower makes them one of the toughest animals on earth. 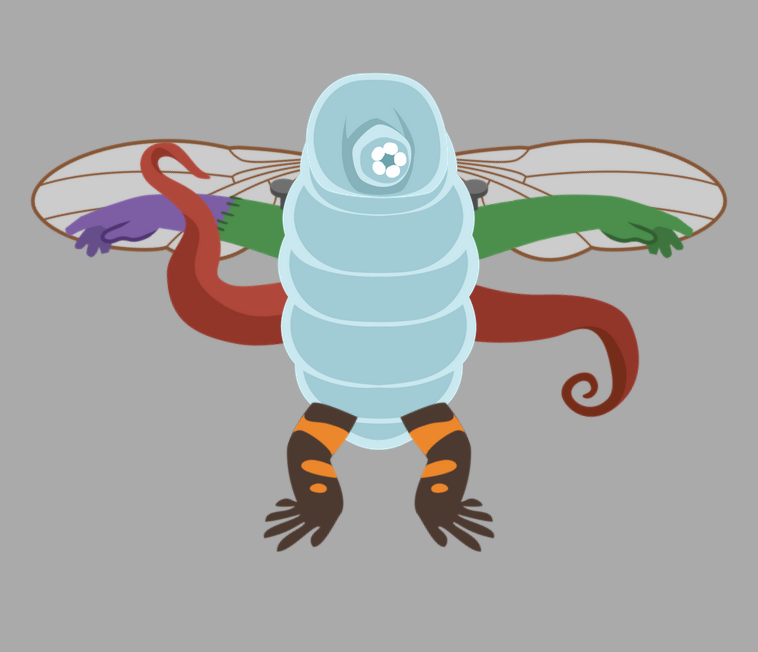 Learn more about tardigrade physiology and how it might match up with other animals' body parts in our game Frankenstein's Lab.