Radiation: in physics, the way energetic particles or waves move through a medium (such as water or air) or space.

In 2007, a rocket ship was launched from the country of Kazakhstan. Its mission was to see how life was affected by space travel. As it reached an area just outside of Earth’s protection, a little round box on the side of the ship opened its lid. The harsh emptiness of space surrounded the life inside this box. At that moment, tardigrades became the first animal to touch open space, and live. 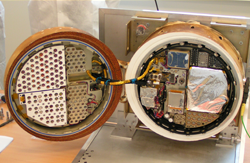 Tardigrades were held in this BIOPAN-6 facility as they flew through space. The lid opened for ten days, just as it is opened here. Image courtesy of the European Space Agency. Click for larger image.

Before that launch, animals had only survived space in the safety of a spaceship or space suit. Space is a terrible place for Earth’s lifeforms. There’s no air to breathe, no food to eat, it’s freezing cold, and incredibly dry. High-energy light beams from the sun and fast-travelling particles smaller than an atom zip around. These can shoot through living bodies and destroy their molecules.

But tardigrades are really tough. Scientists are not quite sure why, but they can protect themselves from most molecular damage, and fix it quickly too. On top of that, tardigrades can dry up to the point where the emptiness of space doesn’t affect them. They fall into such a deep sleep that they don’t need to eat or breathe.

A group of scientists from Sweden and Germany worked together to send tardigrades into space. They picked four different species, to see if some were tougher than others. The tardigrades were dried out and then packed into little metal chambers. All would face outer space and its damaging sub-atomic particles. But, some were in chambers with sun shades that blocked radiation from the sun.

The image on the left is of the chambers in which the tardigrades were placed, some with sun filters. The image on the right shows the yellow tardigrades, Richtersius coronifer, that were part of the experiment. Images by K. Ingemar Jönsson. Click for larger image of chambers.

Scientists placed the chambers in a experimental facility about the size and shape of a large birthday cake. Then, they attached it to the space ship. The ship had no humans on it (just experiments) but humans watched it from earth. When the ship was outside the earth’s atmosphere the facility opened for 10 days, bathing the sleeping tardigrades in open space. It closed before the space ship came back to earth again. 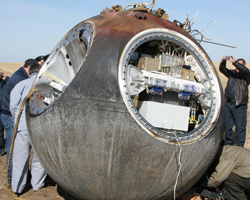 This Foton-M3 re-entry capsule was shot into space on a rocket, and then came back to earth. Here, scientists are retrieving the experiments so they can see how well they survived space. Image courtesy of the European Space Agency.

Can Tardigrades Live in Space?

Upon landing back on earth, scientists rescued the sleeping tardigrades from the space capsule and brought them back to the lab. There, the scientists could see who survived, and if the survivors were forever changed by space travel.

The tardigrades protected from the sun survived as well as if they had stayed on earth. They went on to make healthy tardigrade babies that didn’t show any effects of their space mission. But, radiation from the sun was too much for most tardigrades to handle. Some of the tardigrades under partial sun shades survived, but all the ones exposed to the full rays of the sun eventually died.

The sun creates a lot of dangerous radiation. Thankfully, the earth's atmosphere stops most of it from reaching us. The atmosphere is also the reason we see such pretty colors when the sun rises or sets. Thanks, atmosphere! Image by Robert Bradshaw.

Tardigrade and TARDIS harware images were kindly provided by one of the scientists on the mission, K. Ingemar Jönsson. Space image via Flicker by John Smith. Additional images via Wikimedia Commons. Images from European Space Agency do not apply to the Share Alike license, so they cannot be re-distributed. 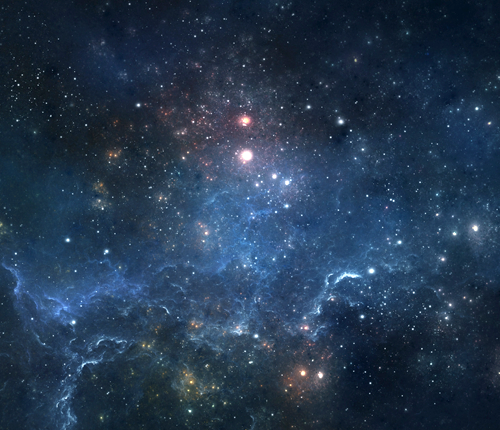 Could tardigrades live in space?