Gut: the intestines and stomach....more

What Makes a Tardigrade?

Under a microscope, a drop of water collected from moss or leaves on the forest floor might look like an alien world. You might think, “how can I find a tardigrade in this soup of floating, spinning, and wriggling critters?” Luckily, tardigrades are one-of-a-kind. If you can spot a few important features, you can find your own tardigrades too!

Tardigrades (left) can look a lot like rotifers (right) if you're not paying attention. However, rotifers scoot along more like inch-worms. Also, all tardigrades have eight legs. The two back ones on this one are hard to see. Image of tardigrade by Dmitry Brant, image of rotifer by Specious Reasons.

Tardigrades on the Prowl 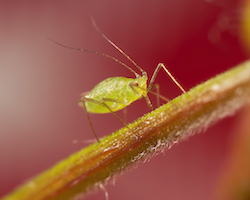 Tardigrades aren't the only animal with stylets. This aphid uses a stylet in its straw-shaped mouth to pierce into leaves and drink sap. Image by Caramosca.

One trait all tardigrades share is their eight stubby legs. Tardigrades have three legs on each side of the body, and two on the back. The legs often have long, bear-like claws on them. You’d think with eight legs, tardigrades should move pretty fast, but they don’t. Instead, they are slow and clumsy. They hook their claws onto objects like plants or sand, as they move along.

Though they might look silly through a microscope, you would not be laughing if you were tinier than a tardigrade. Tardigrades have round mouths with muscles in their heads that work like cheeks to suck up food. Instead of teeth, they have two terrifying spears. They use these spears, called stylets, to pierce their food and drink the insides like juice. Some tardigrades are plant eaters, but others eat smaller creatures and single-celled organisms. Some even eat other tardigrades.

If you watch a tardigrade wobble around on its little clawed legs and poke things with its pointy face, it might remind you of a tiny hamster. If you looked inside its body, you’d notice one big difference: no tiny bones. Instead, tardigrades have a special “skeleton” that works like a rubber glove filled with water. The liquid that fills tardigrades is called hemolymph, which is full of nutrients, much like our blood.

A Tardigrade's anatomy is a lot like ours - they have muscles, brains, eyes, and stomachs. Image by Ioulia Bespalova. Click for more detail.

Many tardigrades have long hairs on their bodies that sense the environment, like a cat’s whiskers. They also have simple eyes that notice if it’s light or dark out, but they can’t see color. Just like us, they have guts that hold and digest food, muscles for moving, and brains for thinking. Unlike us, they don’t have lungs, and instead soak up oxygen straight from water. 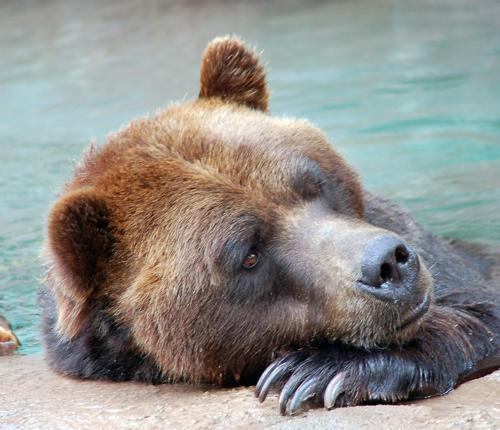 Tardigrades are sometimes called water bears because of their claws, bulky body, and snout-like mouth. What do you think, do tardigrades look like this bear to you?