Ion gate: a small hole (pore) in a cell membrane that lets certain ions in and out....more 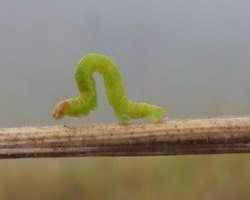 Not all muscles look like the red muscular tissue in humans. Inch worms have thousands of tiny muscles in their bodies.

The neon green caterpillar inches across the leaf, curling and stretching the long middle of its body to push and pull the rest along. With each large step—push and pull, push and pull—it uses thousands of tiny muscles to move its body. Once it reaches the edge of the leaf, it stops and uses hundreds of different muscles to begin eating.

For most animals, movement is a necessity. Moving can protect you from predators, let you find, catch, or eat food, and let you reproduce. But how do different animals move, exactly? Well, to start with, some don’t.

Some animals, such as sea sponges, don’t have muscles. Once they begin to grow in one spot on the seafloor, they don’t actually go anywhere else—they have a sedentary lifestyle. They still have movement though, if you look close enough. 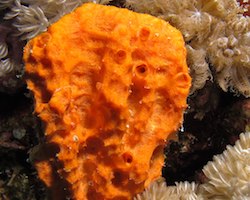 Sponges are animals, but they can only make small movements. Image by Derek Keats.

Cells can move some sea sponges very tiny distances over the seafloor and other cells open or close pores that let in water. They also have cells with flagella that can whip through the water and cause water movement. As water moves across a sea sponge’s body, cells are also responsible for capturing food as it passes by.

Most other animals have muscles. Whether you look at tiny zooplankton jumping through the ocean current, slow-moving snails laying eggs, or a hummingbird flying backwards, most animals rely on muscle movement to live.

There are several types of muscles, but they can all be divided into two categories - either striated (striped) or smooth. The skeletal muscles you use to walk, chew food, or to follow the line of this sentence with your eyes are striated. Your heart is made of cardiac muscle, which is also striated. Animals that don’t have a skeleton also have some striated muscles. Insects use them to fly, slugs to crawl, and zooplankton to swim through the water. 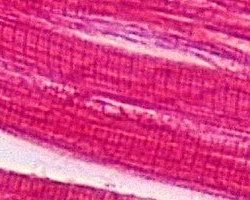 In this striated muscle, you can see the lines that go up and down along the muscle. Image by Berkshire Community College Bioscience Image Library.

The other type of muscle is smooth muscle, which is not striated. All smooth muscle is involuntary, meaning we cannot simply decide to make it move. (Some striated muscle, like cardiac muscle, is also involuntary.) It moves and works without any conscious effort from us. Smooth muscle is in your bladder, your digestive system, and it even controls the pupils in your eyes.

Nerve signals are actually made up of tiny charged atoms moving in and out of a cell. As a signal moves down a nerve cell, imagine small doors in the cell opening, and thousands of tiny atoms start rushing in while others rush out. The atoms rushing in and out of nerves are sodium and potassium ions, which is part of why these chemicals are important to have in your diet. 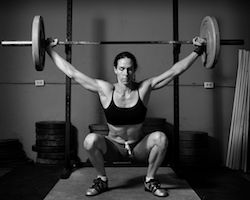 When you flex your muscles, you rely on the movement of calcium, sodium, potassium, and other chemicals to excite your muscle cells. Image by imagesbywestfall.

When this action potential finally reaches a striated muscle cell, calcium flow into the end of the nerve causes it to release a special chemical, acetylcholine. This chemical crosses over to the muscle fiber and stimulates it. The whole process is called excitation, and opens more sodium and potassium doors (called ion gates), setting off an action potential within the muscle cell.

Once excited, long chains of proteins called myofilaments are activated. By making small movements, some of these protein chains “walk” down other chains, to move the filaments along one another. Happening quickly, across many filaments in a muscle cell, that cell shortens, or “contracts.” When the muscle fibers relax, the filaments return to their original positions, and the muscle relaxes.

The majority of animals use muscles to move. This is true whether they have an internal skeleton like we do, an exoskeleton like insects, or no hard skeleton at all. Some animals with no skeleton and some with an exoskeleton use fluid as an extra form of support. Though it is not rigid, it is sometimes called a hydrostatic skeleton, where hydro- means water (or fluid) and -static means stable or fixed (not moving). By flexing muscles near or around fluid pockets in the body, that fluid can be forced into different areas, causing movement. 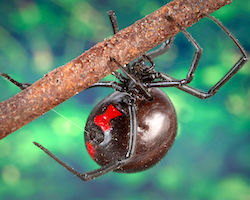 Black widows use muscles and pressurized fluid to move their legs. Image by James Gathany, CDC.

The legs of spiders move with the help of a hydrostatic skeleton. They use muscles to bend their legs in, but they pressurize the legs with fluid to move them out. Even when animals are at rest, most of the time, their bodies are in constant movement, as they eat, digest, and breathe. And this is due to the magic of a very special tissue type—muscles.

Additional images via Wikimedia Commons. Hibernating bats image by US Fish and Wildlife. 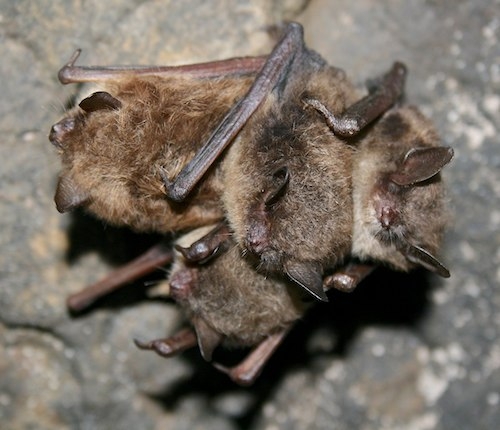 What happens to muscles when animals are inactive for a while, such as during hibernation? Usually muscled get smaller and weaker when they aren't being used. But many animals, like bats, avoid muscle loss during hibernation. We can learn a lot about muscle health from those animals.