Bond: a feeling or an agreement that unites two or more individuals.

It’s early July and you’re out for a night hike in the hot, dry Sonoran Desert. You weave your way between cactus and brittle bush, carrying a large pack of water with you. Without water in this desert, you could die within hours to days. Coming around the side of a prickly pear cactus, you suddenly see a small dark shape that stands out in your headlamp. And it certainly sees you—it hisses. You’ve surprised a Gila monster, a venomous lizard found only in North America. 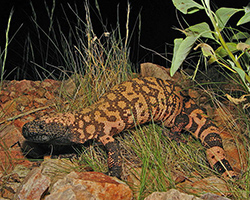 How does the Gila monster survive in such a dry desert? Click for more detail.

With no rain falling for months every summer, you wonder how this animal survives conditions that you can barely handle for an evening. But it has special adaptations to help it live in the dry desert. Gila monsters hold water stores in their bladders that they can pull from to slow dehydration. They can also survive through a level of dehydration that would kill you or me.

Hydration state is a measure of the concentration of solutes in body fluid. The more salt you add, the more concentrated your solution would be. That means you have more grains of salt per unit of water. Every animal has a set range of hydration at which they can survive. Most vertebrates are around the same range, but other animals are higher or lower. Why is keeping a specific range of hydration (or ion concentration) important?

Precious Proteins: Why Electrolytes Are Important

Let’s try to shrink down into the world of molecules for a minute. Molecules are groups of atoms that hold an important three-dimensional shape. Some molecules are especially important for your body to work, like proteins. Proteins are molecules that your body depends on for pretty much everything. Your muscle and skin are made of proteins. The hormones and enzymes that your body uses to send messages and to do work in cells are proteins. Without proteins, living things (as we know them) wouldn’t exist. So, especially in proteins, that three-dimensional shape is very important. 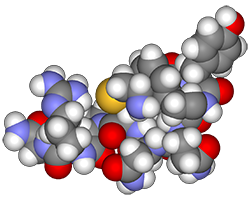 Proteins have a specific 3D shape that is required for them to work properly. This protein is the hormone that lets Gila monsters pull water out of their bladders when they are dehydrating. It is called anti-diuretic hormone.

The three-dimensional shape of proteins is held together by bonds and chemical attractions. For that shape to exist and not fall apart, your proteins must be kept at the right temperature, and the fluid they are bathed in needs to have the right concentration of chemicals. Without that, the proteins would break, or denature. Because of this, keeping the right balance of fluids and salts, ions, or other solutes is important.

Ion balance is also important to send the signals throughout your body that tell you which proteins are needed where. So maintaining a specific concentration of ions in different bodies is a must; otherwise, your body will stop working. Even if you exercise too much and don’t take in enough salts for just a few short hours, you may start getting cramps. Some researchers think this is due to your muscles misfiring, because they are short on specific chemicals they need to work properly.

But not all animals need the same concentration of ions. Some invertebrates keep their body fluid at very low concentrations, while some marine animals may keep a very high concentration. Many animals also deal with different environmental challenges to keep their ions balanced. For example, some fish live in freshwater, while others live in saltwater. Freshwater is usually less than 0.05% salt, while saltwater can be up to 5% salt. How do similar animals deal with such drastically different challenges?

The Case of Adaptable Amphibians

For a good example, let’s look at a type of animal that is found in a large number of different environments: amphibians… or, more specifically, let’s look at frogs and toads. Most frogs and toads are found living in areas near standing freshwater, including ponds, little puddles in the rainforest, or even melted snow. However, some live in the desert, which only gets seasonal freshwater. There is even one frog that lives part time in the ocean, which has saltwater. How does this same body form, with a lot of similar physiology, live in such varied places? Looking deeper gives us good examples of some of the adaptations that help animals deal with ion balance. 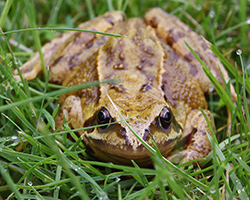 Most frogs need to live near a source of freshwater. Image by Charles J Sharp.

Many frogs need to live near freshwater because they lose water quickly across their skin through evaporation. When they sit in freshwater, they absorb water quickly, taking on a lot of extra water. To keep their fluids balanced, they need to get rid of that extra water. How do they do that? By peeing. A lot. Frogs have urine that is very low in solutes, so they get rid of a lot of water that way.

But what if you put a frog or toad in a very dry place? Some species of spadefoot toads live in the Sonoran Desert, where there is a drought every year that lasts about three months. Toads, like frogs, have very permeable skin, so if they tried to stay above ground during the hot, dry summer, they would die from dehydration. Instead, before the hot, dry season comes, these toads soak up extra water and then bury themselves underground. They build a mucus cocoon around themselves so they don’t lose water as quickly. These toads can also tolerate losing almost half of their water weight, becoming fairly dehydrated.

There is one special species of frog that lives part-time in the ocean. The crab-eating frog can hydrate itself by sitting in salt water. How does it do this? If water moves from areas of low salt concentration to areas of high salt concentration, wouldn’t a bunch of water rush out of the frog’s body and into the ocean water? Well, it would… unless the frog had other solutes in its blood that increased the concentration, without making it saltier. This is a common trick used by some marine animals. Non-salt chemicals are stored in the blood and tissues to raise the concentration of chemicals, without making their blood saltier. 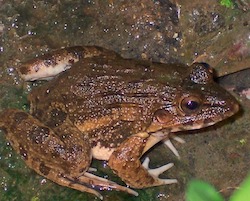 Crab eating frogs can hydrate themselves by sitting in sea water. Image by W.A. Djatmiko.

For the crab-eating frog, they fill their blood with extra urea, a chemical that is made when you break down some foods. But many other animals also use this trick. For example, sharks may store urea or a special acid (called TMAO) in their blood, to avoid losing body fluids to the ocean water. Some animals can even increase the concentration of these solutes to make their body fluids more concentrated than ocean water. This brings water into the body from the ocean.

Additional images via Wikimedia Commons. Goldfish by Elma from Reykjavík. 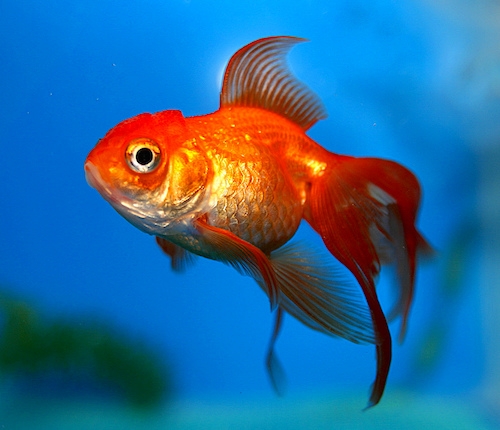 Fish that live in freshwater absorb a lot of water. To get rid of it and avoid getting too hydrated, they pee a lot.