Fixed action pattern: a behavior or sequence of behaviors that must be completed, once started. They are innate, meaning present from birth....more

Jet propulsion: moving forward by the backward push of gas or liquid....more 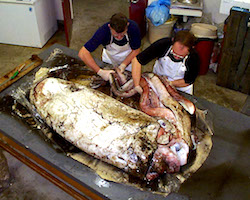 Giant squids can be found in the deep ocean. Scientists have learned a lot about how nerves work by studying a few giant squids. Click for more detail.

The deep ocean is a world of its own, with low to no light, but creatures of all kinds. There, you may find giant squids, jetting around to escape from the toothy mouths of whales and sharks. They move around quickly with their water jet propulsion system. They control that system in part with paired giant axons that almost run the length of the squid’s body.

Giant axons can be up to a meter (or about 3.3 feet) long. Their large size makes them helpful to study, and scientists have learned a lot about how nerves work from these giant cells. Nerves are made of a cell body, which holds the nucleus and other organelles, the dendrite, which receives signals, and the axon, which sends signals. Giant axons also have large diameters (width), which enable them to send signals faster.

Nerves are Not for Everyone

Most animals do share the same basic building blocks of the nervous system. They have similar nerves that work in the same way (mostly). They also have a control center, where many signals are sent and where others begin from. In many animals, including humans, that control center is large and complex enough that we call it a brain.

Which animals have brains? All mammals, birds, and fish have brains, some insects (like honey bees and ants) have brains, and even some other invertebrates, like octopuses, have nerve bundles large enough that they are often called brains. As you get smaller nerve bundles, they are usually called ganglia instead of brains. 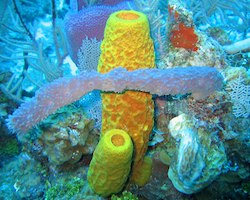 Sea sponges don't have any nerves. Image by NOAA-OE.

But not all animals have a “control center”; not all animals even have nerves. Sponges are a whole group of animals that have bodies full of openings for water to circulate through. They have cells that can move around, but they do not have a circulatory system, a digestive system, or a nervous system! They have absolutely no nerves. Which is probably why they don’t move around very much.

There are also some animals that do move around, but don’t use a nervous system. Trichoplax is the name of a group of animals that look almost like one large, thin cell. They are so thin that they are see-through, and they do not have any organs. To coordinate movement across the whole body, they have an alternative to a nervous system. One main cell stretches across the body of Trichoplax, sending areas of the cell (which we might call “arms”) to different parts of the body. This makes a fibrous network, which may use ions as a way to send signals.

Nerves Cause All Kinds of Responses

Nerves are important to control movements, but they are also an important part of behaviors and emotions. The nervous system automatically controls a lot of your body’s movements, such as when you breathe or when your heart beats. But nervous systems also help control reactions and behaviors.

You may have been at the doctor before and had them knock an object against your knee, causing your leg to lift. This is a reflex test of your nervous system. Reflexes are automatic responses to a stimulus that are controlled by your nerves. 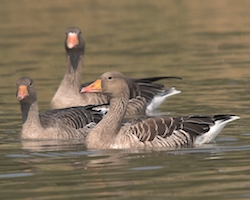 Greylag geese have a fixed action pattern response to eggs that have rolled out of the nest. Image by Marco Hebing.

Lots of animals also have automatic behaviors. For example, if an egg rolls out of the nest of a goose, the goose gets the egg back to the nest with a specific set of movements. If those movements continue even when the stimulus (here, the lost egg) is moved, it’s called a fixed action pattern. If you take the egg while the goose is trying to get it back, the goose will still make all the same movements, moving air back into her nest instead of an egg.

Humans and some animals are also emotional creatures. Several parts of the nervous system are involved in linking our senses, like smell and touch, with our memory and our emotional reactions. Whether through automatic movements, or conscious ones, most animals share the same basic units of the nervous system. Such similarities make our differences all the more incredible. 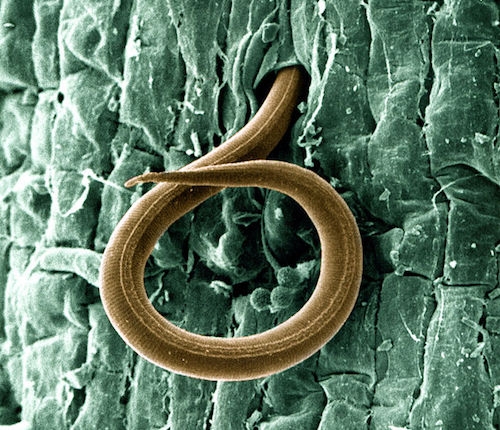 Nematodes are roundworms that live all over the world. They have unique nervous systems, as they don't seem to have the normal action potential in nerves that most animals do.