Clone: a genetically identical organism that was made by asexual reproduction.

Parthenogenesis: reproduction from an egg that has not been fertilized.

Where Do Babies Come From? 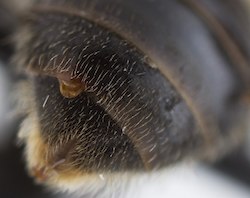 A Strepsiptera wasp is lodged in the abdomen of another insect. Click for more detail.

Your parents might have told you that babies come from moms’ bellies. In many cases, this is true – and it is gruesomely true in some Strepsiptera wasps. The female wasp digs under the skin of an unsuspecting host, such as a bee. She then sticks her ovipositor outside of the bee, and waits for a male to mate with her. After some time, her young will develop in her body, and literally eat her from the inside out, then leave to find another host. How is that for motherhood? 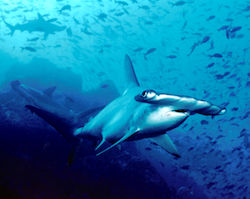 Let’s look more closely at different ways to reproduce asexually. You may know that some animals (like sponges and hydra) can reproduce asexually, by growing another small version of themselves. This small piece is sometimes called a bud. They don’t use an egg at all during reproduction. Some animals can also make a smaller, identical version of themselves, but they do it with eggs. This process is called parthenogenesis, where a female creates a clone of herself.

Parthenogenesis happens in lots of invertebrates, and in some fish, reptiles, and other vertebrates. Researchers have even discovered parthenogenesis in the Komodo dragon – much bigger than a bacterium – because a lone female at a zoo was producing eggs that hatched! Since then, researchers have discovered that about 70 species of animals can lay eggs that can survive, without ever mating with a male.

A group of lizards called whiptails can reproduce through sexual reproduction with a male, or through parthenogenesis. One species, the desert grassland whiptail lizard, only reproduces through parthenogenesis. In the other species of whiptail, when a female mates with a male, the male and female assume a specific position. In the female-only species, when a female wants to produce offspring through parthenogenesis, she cannot do so unless another female lizard grasps her the way a male would in another species. Researchers think this is because, whether they are mating with a male or producing a clone, the act of mating (called copulation) unlocks a key piece of their reproductive physiology.

The Perks of Partners 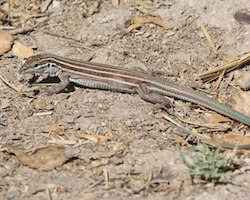 When females of this whiptail lizard species reproduce, they must go through a fake mating sequence to initiate their reproductive cycle. Image by Alan Schmierer.

Why don’t all animals reproduce asexually, then? We know that when organisms reproduce sexually, their offspring only receive about half of their own genes. The other half of comes from the other parent. If mating means that you only pass down half of your genes to each offspring, why do it at all?

Scientists think that one of the reasons organisms evolved to reproduce sexually is because the environment is always changing. The clones (offspring) of an asexual animal are identical to the parent, which means that all clones have the same traits as the parent and as each other. Under the same environment as the parent, the clones should thrive. However, if the environment changes, these traits may not be beneficial and all clones may die before they can produce a new generation of clones.

Sexual reproduction mixes the genes into new combinations. By combining genes with a mate or partner to create offspring, you make genetic diversity. Not all the offspring will be the same, and some may have better traits to support survival than others. So, while organisms that reproduce sexually only pass down half their genes each time, they also benefit by having offspring that might be better at surviving or passing on their genes. 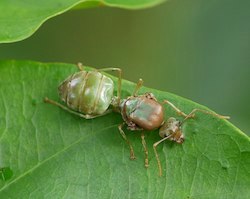 The sex of most ants, beees, and wasps are decided by a system we call "haplodiploidy." Weaver ant queen image by Dinesh Valke.

Haplodiploidy is most well known in Hymenoptera, or the group of animals containing ants, bees, and wasps. Female queens in these animals have special chambers for storing sperm, and they can choose whether or not to use sperm with their eggs. Many animals, like birds, won’t have offspring if they lay unfertilized eggs. But in Hymenoptera, unfertilized eggs have a single set of chromosomes (they are haploid) and actually develop into males. These males share 100% of their genes with their mother, the queen. Her female offspring, on the other hand, have two sets of chromosomes (they are diploid). The females share genes with their mother and with their father, who provided the stored sperm.

How Much Do Parents Care?

Once organisms reproduce, some of them provide care for their offspring. Though some parents do care for their young as part of a deeply emotional connection, the behavior and connection is fueled by chemicals. Parental care is controlled by the release of hormones, such as oxytocin in mammals, that encourages the parent to provide their young with food, defense, and shelter. In many cases, female animals devote more energy to raising offspring. Eggs are more costly to make than sperm, and if an animal carries eggs or young internally for long periods, it can be quite an investment. However, providing food and defense for new born or hatched young is the most expensive part of parental care. Whether females or males provide or share this expensive part of parental care depends on the species.

You may picture mammals as the main animals that provide parental care, but this isn't true. Many animals, from birds to leeches, provide parental care. Some fish parents, for example, will stay near a nest and fan fresh water over their eggs to increase their oxygen supply. An extreme case of this occurs in the giant pacific octopus, which lays thousands of eggs, and fans them for months. As the offspring begin to hatch, the mother has used up most of her energy and she dies shortly after. 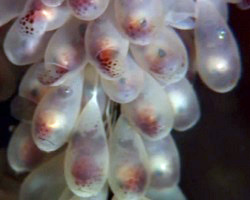 A female giant octopus will guard her eggs for months, until they hatch and swim away. Image from Vimeo Challenges of Life video by Doug Anderson.

The giant pacific octopus isn’t the only animal that dies after reproducing. When an organism only reproduces once and dies, this is called semelparity. When they reproduce more than one time, it is called iteroparity. Animals may evolve to be semelparous because the conditions are too harsh for them to survive for the entire year.

For example, Labord’s chameleon lives in Madagascar, and has the shortest lifespan of any vertebrate with four legs. There is a long, dry season on Madagascar that makes survival through the year unlikely for the adult chameleons. Instead, they mate during the short rainy season, and females lay eggs that remain dormant for some time. When the rains come, the eggs develop and hatch, and the young grow up on their own very quickly. Within about 4-5 months, those young have grown to adults, they mate, and then they begin to die.

Whether or not parents provide direct parental care (food, defense, or shelter), all parents invest in their young. Making eggs and sperm uses energy, and finding a mate can be difficult. But if a species doesn’t reproduce, it won’t last for long. 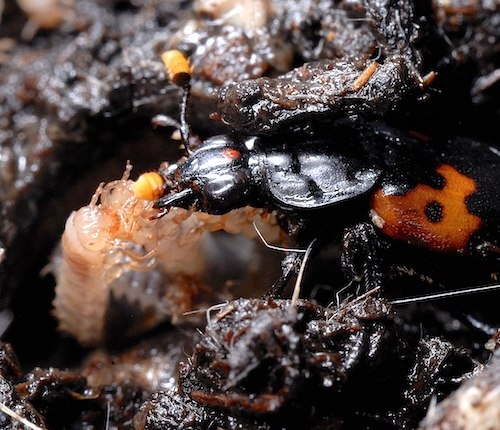 In some species, parental care is a part of reproduction. Though all mammals have parental care, it occurs in some other species that might surprise you, like in this species of burying beetle.