AIDS: a disease that causes the immune system not to function as well as it normally would......more

Bacteriophage: a virus that can infect bacterial cells... more

MRSA: short for Methicillin-resistant Staphylococcus aureus. A bacterium that is resistant to certain kinds of antibiotic and can cause infections that are difficult to treat... more 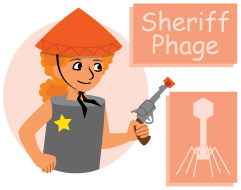 Viruses of many kinds exist on our planet. Some viruses infect humans. Some viral infections are minor and annoying, like the common cold. Others are severe and deadly, like AIDS.

Did you know that there are viruses that only infect bacteria? They are helpful and important. Scientists call them bacteriophages, which means “bacteria eaters.” We can call them phages for short.

Phages have the ability to make copies of themselves. To do this, they need a host cell. The phage attaches itself to a receptor on the surface of a bacterium’s cell wall. It is almost like a key searching for the lock that it fits. 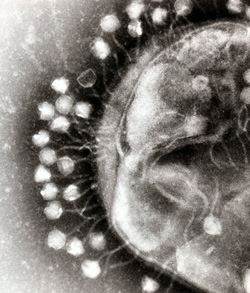 Once firmly attached, the phage then injects its genetic material into the host cell. Phages are like pirates. They take over the internal machinery bacteria use to reproduce. Once infected with a phage, a bacterium is reprogrammed to make copies of that phage.

Certain types of phages only infect certain kinds of bacteria, so they are named after the type of bacteria they infect. For example, the phages that infect E. coli bacteria are called coliphages.

Scientists are busy studying and finding ways to use phages to fight disease. They are using them to infect and destroy MRSA and other types of bacteria that have become resistant to antibiotics. 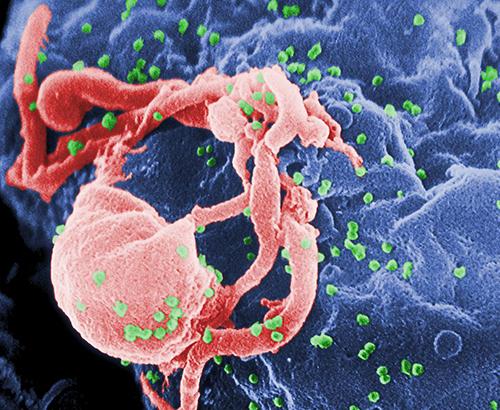 In the above image the HIV virus is attacking a cell in order to clone itself and spread.