Enamel: a hard, white substance that works as a protective covering. The outsides of human teeth are enamel... more

Gland: an organ that releases materials for use in certain places in the body or on the outside of the body... more

Bacteria among us, on us, and inside us 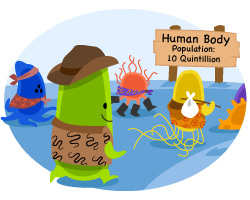 Trillions of bacteria and other microbes live all over the outside and inside the human body. Altogether, these microbes are called the human microbiome. Many types of bacteria have a bad reputation. They cause all sorts of illness and disease. But other kinds of bacteria do many helpful things in the body.

Scientists estimate that each of us carry 10 times more bacterial cells than all the cells that make up the human body. Many kinds of bacteria live on our skin. Bacteria live all over our bodies— there are lots in our mouths, too. They live in our saliva. And some bacteria even live under our eyelids on the surface of our eyes. However, the largest number of bacteria live in our guts. 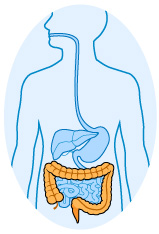 Our guts are important. The gut includes the stomach, small intestine, and large intestine. Together, these pieces make up a large part of the digestive system. Scientists know that the gut has a huge impact on each and every human body system. Some experts say that as much as 70 percent of the immune system actually lives in the gut.

The human gut is home to more than 100 trillion microorganisms. This massive crowd includes more than 400 kinds of bacteria. Some are good. Some are not so good. And some are downright ugly and nasty. Good bacteria in the gut are important. They play key roles in keeping the body working smoothly and efficiently. Nasty bacteria can make you sick. They can cause diseases and infections. Luckily, most bacteria inside you right now are harmless. They live peacefully side-by-side with the cells of your body.

Bacteria in our stomachs

Our stomachs are filled with powerful acid. The acid helps to digest all of the food that we eat. Most living things cannot survive in acid. That includes most microbes.

Still, some types of bacteria can survive in the hostile environment of the stomach. Heliobacter pylori are bacteria shaped like tight spirals. Scientists know that this microbe can attach to the stomach’s cell lining. It can cause peptic ulcer disease and might be a cause of stomach cancer. Scientists are still exploring what roles this bacteria may play in our digestive process.

Bacteria in our mouths

The number and type of bacteria on any given part of the body varies from person to person. Plenty of bacteria live in our mouths. They live on our tongues and on our teeth. Bacteria are part of a sticky substance called plaque. You brush your teeth to get rid of the plaque. When you don’t brush well, the plaque hardens into a substance called tartar. Dentists call it calculus. These same bacteria secrete acid that can dissolve tooth enamel. This can cause cavities and tooth decay. These bacteria are always in your mouth, but it is important to go see the dentist so that you can clean out old build up.

Bacteria in our eyes

Some bacteria even live on the cells that form the inside of our eyelids and the surface of our eyes. That cell lining is called the conjunctiva. Glands in our eyes make fluid constantly. That fluid keeps the conjunctiva moist. When we blink, the eyelids wash away bacteria, dust, and other harmful substances from the surface of our eyeballs. Our tears also contain chemicals that keep bacteria from growing out of control.

Bacteria in our lungs

The lungs are a major part of our respiratory system. We must breathe air to get oxygen into our blood. But air is always filled with microbes. Our lungs have built-in ways to remove bacteria and other harmful microbes. Special cells produce mucous, which is a thick, sticky substance that traps bacteria.

Bacteria on our skin

Our skin acts as a barrier. It keeps nasty, disease-causing microbes from getting inside our bodies. However, plenty of bacteria live in our hair, on our scalps, and all over every square inch of our skin. Some live on the skin’s surface. Some live deep among the many layers of our skin.

Lots of bacteria are found near the tiny glands that produce oil and sweat. These glands provide the bacteria with water and nutrients to grow and reproduce. By itself, human sweat has no smell. The bacteria living near sweat glands play a role in producing body odor. It’s true, bacteria can make you stink. 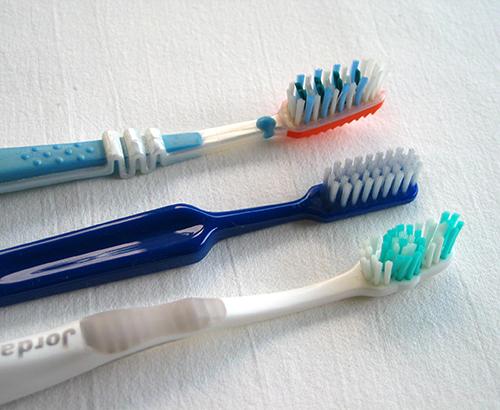 Brushing your teeth twice a day removes the plaque bacteria buildup on your teeth.

The Human Microbiome | Ask A Biologist
Skip to main content