The human body has the ability to recognize millions of different enemies. Our built-in “defense force” is called the immune system. Different parts of the system can produce cells and powerful chemicals called cytokines. These cells and cytokines match up with and destroy bacteria and other invaders. Millions and millions of immune system cells are organized into sets and subsets. These groups of cells pass information back and forth.

The chemical substances produced by these cells function as an internal alarm system. Their message is simple: “Germs are here. Kill the germs.” 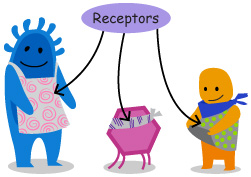 Each and every cell in our body carries special marker molecules. These markers are also called antigens. They advertise “self.” Think of a typical cell as being an orange covered with knobby toothpicks and colorful little marker flags.

On a real cell, these toothpicks and flags are bits of protein and other special molecules. One or more of these bits of protein tell the immune system's hunter and killer cells that everything is fine. The alarm sounds when immune defenders come across a cell or microbe that has no “self” marker. The system swings into action to meet the threat of disease. 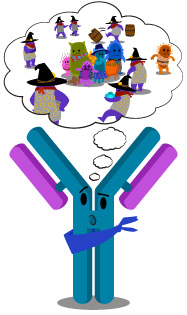 Immune system cells can remember past fights with disease-causing viruses and bacteria. The system keeps a chemical record of how it recognized each invader. These special protein molecules are called antibodies. Antibodies are Y-shaped molecules. They fit a specific antigen much like a key fits into a lock. Any cell or organism that triggers the immune system into action is called an antigen (and is usually a non-self antigen). Antigens can be germs such as a virus or bacterium. Or they can be bits and pieces of those germs.

Antibodies lock onto an antigen. They serve as the flag that marks the invader for destruction. Later, when a similar microbe invades again, the body recognizes it as an invader. The immune system cranks into action. The goal is to destroy the invading antigen or microbe before it can develop into a new infection.

This is why most people get chicken pox or other childhood diseases only once. The immune system fought the fight once against these invading germs. Vaccines work the same way. They expose your body to pieces or weakened versions of the germs, and your body learns to fight them off. Vaccines for measles and mumps help children avoid getting the disease at all. Your body keeps a chemical record and protects you from contracting those illnesses. 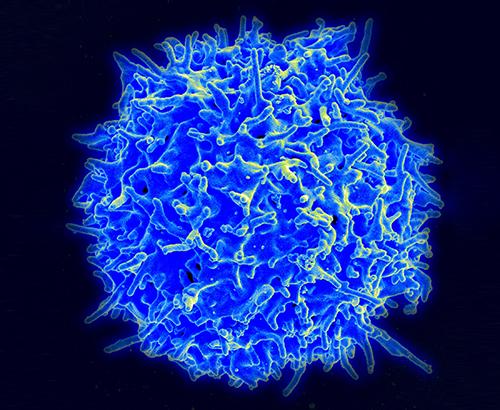 An image of a T-cell, which plays an important part in the immune system.