Strep throat: an illness that causes fever and sore throat, and is sometimes treated with antibiotics... more

Compare a single bacterial cell to one of your body’s many cells. The structure is different. They reproduce differently. They absorb nutrients from the environment in different ways. The way they convert and use energy is not the same.

Antibiotics are substances that kill bacteria without harming the cells of your body. They do this by interfering with the way bacteria live and grow. Normal body cells work differently, so they stay safe. 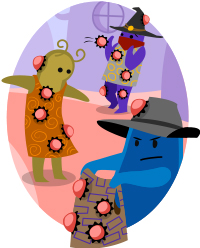 Your body’s immune system is tough. It’s usually able to fight off harmful bacteria without help. But sometimes it cannot do it quickly enough. Antibiotics are the reinforcements. They ride to the rescue. Antibiotics slow or stop fast-growing bacteria. They give your immune system time to get an infection under control.

Unfortunately, most antibiotics can’t tell the difference between good and bad bacteria. Lots of good bacteria are killed as a result. It takes time for your body to replace all those good bacteria.

Viruses are other germs that can also make you sick, but antibiotics cannot kill or stop viruses from causing illness. Why not? Because viruses are very different from bacteria, both in structure and in how they function. Viruses reproduce and grow only when inside living cells. They are much smaller and simpler than bacteria. Technically, they are not living things at all.

You feel lousy. Your throat is sore. Your head aches and you have a fever. What could be making you sick? The symptoms alone can’t tell you if the culprit is a virus or bacterium. Viruses that cause the common cold produce these symptoms. So do Streptococcus bacteria, the cause of strep throat. Antibiotics will kill the strep bacteria but they do nothing against against viruses.

Doctors need to figure out what microbe is making you sick in order to help. If a doctor suspects strep bacteria are the cause, they will often collect a sample to test for the bacteria. Samples are taken by swabbing the back of the throat. If the strep bad guys are present, the doctor will give you antibiotics to help your body fight them off. If not, the doctor will probably instruct you to stay home, rest, and drink plenty of fluids.

How are antibiotics given? 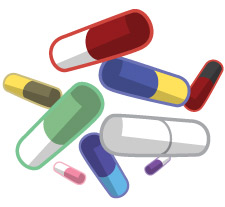 Antibiotics come in different forms. The type of antibiotic you take depends on what kind of bacterial disease you’re trying to treat. Oral antibiotics are pills taken by mouth. Doctors often use these to treat strep throat and other bacterial infections. Topical antibiotics include creams and lotions. They are applied directly to the problem area on the outside of the body. These are good for treating infected cuts or scrapes. 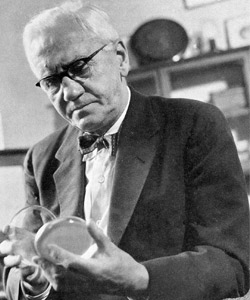 We learned about bacteria long before we figured out antibiotics. Infection and disease have always been dangerous. But we’ve only been using antibiotics to kill bacteria and treat disease for less than 100 years. Before antibiotics, even cuts and minor scrapes could turn deadly.

Luck plays a role in many aspects of life. The same is true in science. Sir Alexander Fleming would probably agree. In 1928, the famous Scottish scientist discovered the first antibiotic entirely by accident.

By the early 1900s, scientists had discovered a lot about bacteria. Fleming was studying a common family of bacteria called Staphylococcaceae, which are usually harmless. Many forms of staph bacteria live on our skin. Others live in the soil.

Fleming was a brilliant researcher, but he was not the tidiest person. He went away for most of a month to spend a summer holiday with his family. He left behind a very messy laboratory. Petri dishes filled with bacterial cultures were left stacked on a bench in a corner. Fleming noticed something quite interesting when he returned to work. A fungus mold was growing in one of the sample dishes. Fleming did not toss it out and instead, he took a closer look. Groups of Staphylococcus grew in one part of the dish, but none grew near the mold.

The mold was from a group of fungi called Penicillium. Fleming had the idea that something in the mold was killing the bacteria. He was right. For a while, he called it “mould juice.” In 1929, Fleming wrote a paper and named his bacteria-killing substance penicillin. 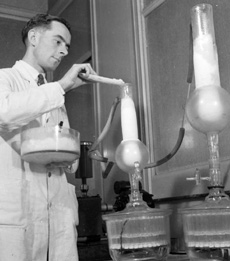 Science can be a long and tedious process. Fleming’s discovery was just the beginning. There was plenty of work to be done. He did many experiments and published his results. However, Fleming was disappointed. It took a long time to grow the mold. It was also very difficult to collect enough penicillin to treat infections in humans. Fleming stopped his research.

Fortunately, good science is all about sharing information. Fleming had written and published his discoveries. Other teams of researchers became interested in penicillin. They continued Fleming’s work. Eventually, scientists found ways to grow and refine penicillin in large amounts. Penicillin and other antibiotics changed the world of modern medicine. Penicillin has saved the lives of millions of people. It is still saving lives today. 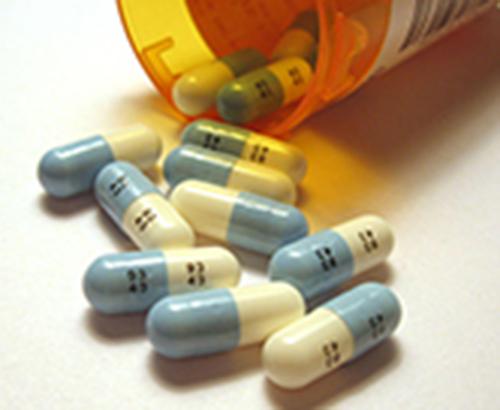 Antibiotics are the quickest method for fighting off bacterial infections of the body.