Vulnerable: open to attack or damage. 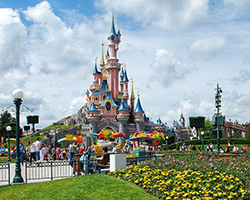 Disneyland is advertised as the "happiest place on Earth." But it's also a place where people are packed into lines and rides right next to one another. In Disneyland Resort in California, this created an opportunity for measles to spread. (Disneyand Resort Paris is shown; image by oudeopa via Pixabay.)

Disneyland is supposed to be the “happiest place on Earth” if you like roller coasters and theme parks. But late in 2014, while people of all ages enjoyed the rides and entertainment in Disneyland Park in California, a measles outbreak was slowly spreading. More than 100 guests were infected by measles. One infected person must have gone to Disneyland to enjoy the attractions, and that person then spread the infection to unvaccinated adults and children. Some of those people who returned from Disneyland then infected others such as family members or friends.

In all, 147 people were infected with measles, risking their lives and those around them. Luckily, no one died. But the spread of illness was still tragic because it was easily preventable. If every guest in Disneyland who could be vaccinated, had been vaccinated, the initial infection would not have affected so many people. It’s possible it wouldn’t have affected anyone. Those who had been vaccinated may have stopped the infection from spreading to the small population of people unable to get the vaccine for health reasons. This protection is called herd immunity. Those who are vaccinated create a shield of protection for the vulnerable population.

Why is herd immunity important?

Herd immunity is important because not everyone can be vaccinated against every disease. Babies have an immature immune system when they are born. They rely on the antibodies provided by their mothers to protect themselves from disease. But there's a downside to that protection. The antibodies from mom kill whatever virus particles are in a vaccine, so a baby's immune system doesn't get the chance to learn from a vaccine. Luckily, herd immunity protects them from getting certain illnesses before they develop a matured immune system and vaccines can work for them. 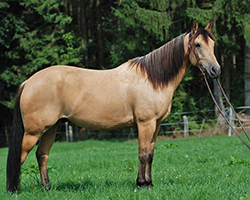 Some people are unable to get certain vaccines or to receive certain antivemons if they are made with ingredients they are allergic to. Several vaccines used to be made with parts of the blood of horses. People allergic to horses were unable to be vaccinated. Image by Sara Landvogt via Wikimedia Commons.

Babies are not the only vulnerable population. A very small percentage of people may be allergic to a certain vaccine or its ingredients. Because of this, that person may not be able to get vaccinated against that germ. This creates a situation where a person who cannot be vaccinated depends on other people being vaccinated to protect them from a disease.

Some people may also have other issues with their immune systems. Issues could be due to previous infections or a genetic mutation. In these cases, it is possible that vaccines may not work successfully. These people also rely upon herd immunity for protection. If they get sick it can quickly become serious. Because of these vulnerable populations, it is important that people who can physically be vaccinated do so. Otherwise, herd immunity may not work, which puts everyone who isn’t vaccinated at risk.

How does herd immunity work? 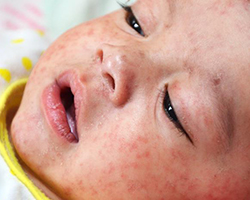 Here, a young child has a rash caused by measles. Measles is very easy to spread, which is why at least 95% of a population needs to be vaccinated to protect the rest of the population. Click to enlarge.

Ebola, on the other hand, is primarily spread when a healthy person comes in contact with the fluids (blood, sweat, etc.) of an infected person. It can live on objects for several hours, but it cannot spread through the air like measles. With these differences, does make sense that the rates of vaccination for herd immunity to work are different?  In Ebola, the level of immunity needed for the population to be mostly protected is much lower, about 33-60%. 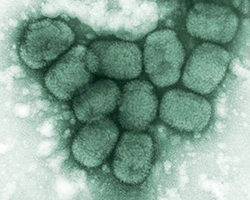 Waiting for natural herd immunity doesn't usually work, as high levels of immunity can take a long time to develop. If we hadn't developed a smallpox vaccine, it is estimated that the smallpox virus would still kill 5 million people per year, bringing the total dead from smallpox to well over 200 million people. Image by the CDC.

This doesn't work well for many reasons, including that during the long, long time it would take for immunity to spread, many, many people would die from the infection. Vaccination not only protects the vaccinated population before infection, but if enough people are vaccinated, it can protect the small portion of the population that cannot be vaccinated.

WIth some diseases, as a global population we can go beyond herd immunity to actually get rid of certain diseases. So far, smallpox is the only example of a human disease that was eliminated through widespread vaccination efforts. The only samples of smallpox are kept in two high security laboratories, one, the CDC in Atlanta, Georgia, and the other, VECTOR in Russia.  Although smallpox is the only human disease that has been eliminated by vaccination, it is not the only disease that could be. Measles and polio are other diseases that could be become extinct due to vaccination efforts. 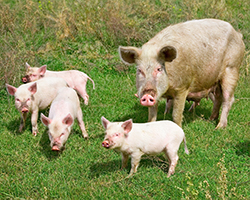 Many viruses infect other species as well, making it much harder to eliminate the disease. For example, influenza infects birds and pigs, and evolves while in different hosts, so different strains are always changing over time. Image by Alexandr frolov via Wikimedia Commons.

Measles, rubella, polio, and smallpox are all germs that only infect humans, which is why we could get rid of these germs altogether, if enough people are vaccinated. However, other diseases are carried by other animals as well, making the process more difficult.

Influenza (the flu virus) infects birds and pigs as well as humans. It goes through rapid changes between different host species, so every year we have to deal with a new strain. That is why the flu vaccine must be given every year—the immunity gained from last year’s vaccine or sickness won’t work well this year.

Because measles (for example) only infects humans, however, if we become vaccinated, as a species, then it may be eliminated from the wild. For this to happen, everyone who can be vaccinated must be. Measles is a particularly dangerous virus and can cause serious illness and death, so being vaccinated is important for everyone’s health.

Vaccines are a win-win

People still have a lot of questions about vaccines, but they can be certain of one thing. By being vaccinated, not only do you help protect yourself from disease, but you also help protect those you come into contact with. It is a win-win. With a few exceptions for rare allergies and other unusual medical issues, vaccines can protect you and others from some diseases for a lifetime.

Vally, H. What is herd immunity and how many people need to be vaccinated to protect a community? The Conversation. https://theconversation.com/what-is-herd-immunity-and-how-many-people-need-to-be-vaccinated-to-protect-a-community-116355 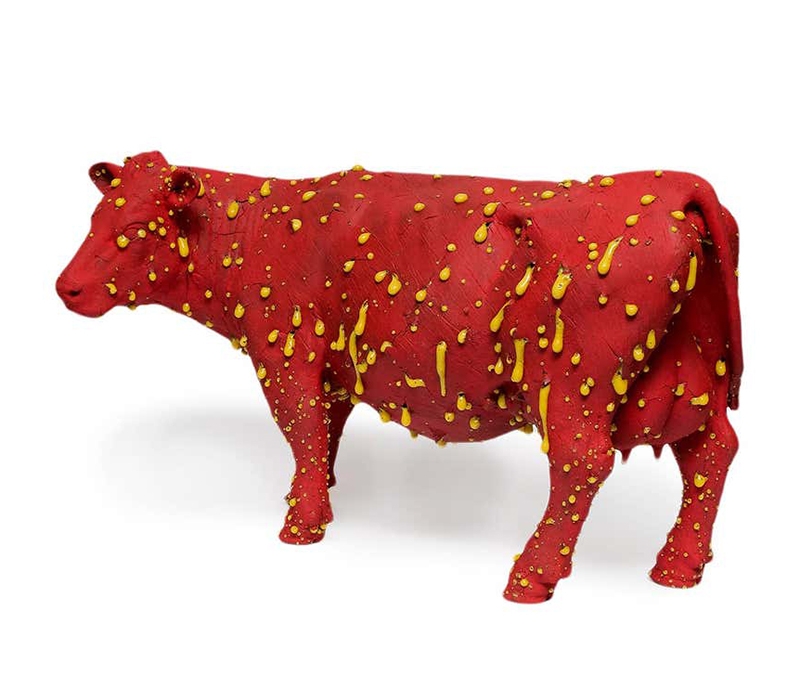