Activate: to make active or turn on.

Effective: works well, and as it was supposed to work.

How are vaccines tested? 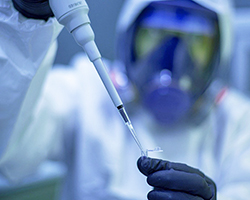 Vaccines go through a lot of testing, even before the thorough human clinical trials required for vaccine approval. Image by Fernando Zhiminaicela via Pixabay.

It’s early September in 2020 and you are a vaccine researcher working to try to protect people from COVID-19. The vaccine you’re testing has just entered clinical trials, which means you are finally testing it on adult humans. One of your test subjects reports a medical issue, and your trials stop. You’ve already been through months and months of testing and re-testing of this vaccine. You tested its ability to protect cells and mice; you tested overdoses of it on mice to see if it had any negative effects; you tested it on a species of monkey; and you tested different mixtures of ingredients to see which recipe is the most effective. But if this one medical issue isn’t a fluke, or odd occurrence, this vaccine will never be sent out for use.

How are vaccines tested for safety?

Most vaccines require some type of cell that they can grow and replicate inside of. These "host cells" may be from a wide range of organisms, whether from bacteria, fungi, animals, or plants. The testing process depends on the type of vaccine that was chosen and the way it was produced. Sometimes powerful microscopes and computer programs will be used to visualize the vaccine; other times the vaccine can be tested without the use of microscopes. 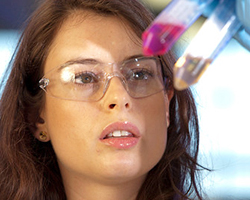 Much of vaccine development can involve problem solving and trying to figure out how to fix a vaccine that isn't working well enough. Image © 2011, Charlotte Raymond Photography for International AIDS Vaccine Initiative (IAVI).

If any problems are noticed, scientists try to find the cause and make changes to fix the vaccine. This might mean that a new method or different host cells need to be chosen to make the vaccine. This process continues until the scientists are satisfied with the experimental results of the vaccine that they have made. Then, they have a “vaccine candidate.”

Once a vaccine candidate is discovered, the vaccine needs to be tested in cells or animals. The vaccine needs to activate immune cells and provide protection against the pathogen. Which tests are used depend on which type of vaccine is being tested. Some researchers can use cells to understand how the vaccine will work when given to humans. Often animal studies are done to test the vaccine’s safety and to check if the vaccine can keep the animals safe from the pathogen. This data is crucial for designing the right dose for the next research stage. 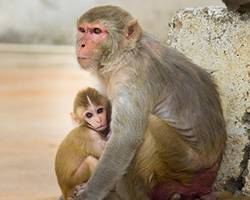 Vaccines may be tested on different animals before they are tested on humans. Rhesus macaques have similar immune systems to humans, so some vaccines are tested on these monkeys. Image by Robbie Ross via Pixabay.

Sometimes adjuvants, materials that help the immune system make a better response to the vaccine, can be added to make the vaccine work better. If the vaccine doesn’t work well, the scientists have to go back the earlier stages to improve the vaccine. However, if it works well in different types of animals and is well-tested, then an application can be filed with the U.S. Food and Drug Administration (FDA) for approval to test the vaccine in human studies. To reach this stage can take a long time, usually several years; however, there is a special process for vaccines that are urgently needed.

When testing something brand new, it’s often best to start small to make sure that everything is working properly. For this reason, the first trials on humans (called phase I clinical trials) have a small group of adult volunteers (20 – 80 people). The goal of this phase is to make sure that the vaccine is safe and to check how well it works. 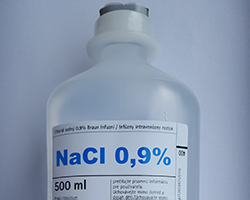 A substance known to not have any immune effects, like saline, is often used as a placebo in vaccine trials. If any specific added materials are used to make the vaccine more effective, those also may be tested with the saline in an additional test group. Image by Wesalius via Wikimedia Commons.

To make sure that the vaccine works, the participants are often divided into two groups. One group gets the vaccine and the other group gets a placebo (in this case, a substance that won't have any effects, like saline solution). Both groups are carefully monitored to make sure the vaccine doesn’t have any side effects and that it provides benefit or protection.

Different doses might be used to fine-tune how much of the vaccine needs to be given to get the maximum benefit. If the vaccine doesn’t work or has a side effect, it goes back to the experimental stage (or pre-clinical stage). Successful vaccines, on the other hand, move to phase II clinical trials.

In a phase II trial, more adults are included to ensure that the vaccine works and is safe. These trials can include hundreds of people, and often has people who have a chance of getting infected with the pathogen. In this trial, a control group of people who get a placebo instead of the actual vaccine is still included to make sure that the vaccine actually works. Different dosages or number of shots might be tested to see which one has the best effect. Once again, if the vaccine doesn’t perform well in the trial, it goes back to the earlier stages. However, if it works as expected, then it gets to move on the next stage. 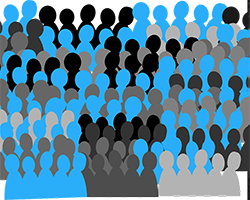 In the third stage of clinical trials, thousands or hundreds of thousands of people are included in tests of vaccine safety and how well the vaccine works. Image by Clker-Free-Vector-Images via Pixabay.

The third stage is the largest test of the vaccine candidate and includes thousands or even hundreds of thousands of people. The reason why so many people are needed in this trial is to detect side effects that might only affect a small number of people (maybe only 1:10,000 or 1:20,000). Because it is very important to ensure that the vaccine is safe to give to people and works well, this phase tries to include very large groups of people and continues testing whether the vaccine protects people from the pathogen and whether there are any side effects. During this phase, children and pregnant women are generally not included. If the vaccine works well and is safe, then the people developing the vaccine can apply to the FDA for a license to start manufacturing the vaccine for delivery.

What comes after vaccine approval?

Once the strict testing and approval processes are complete, vaccines are ready to be made and delivered on a large scale.

Even after the vaccine is launched, most companies keep studying the vaccine to make sure that it is working well and is safe. At this time is also when the vaccine may begin to be tested on children and on pregnant women. These types of studies that happen after vaccine approval are called phase IV trials. Doctors continue to keep watch for any side effects that could be caused by the vaccine and they can report it through the Vaccine Adverse Event Reporting System*. Parents and other health care providers can also use this system to report any problems. The Center for Disease Control (CDC) and the FDA carefully monitor these reports to find whether the event was caused by the vaccine and then take steps as needed.

Making vaccines is a long process and has many steps. However, the end goal is to ensure that the vaccine provides protection against the pathogen while being safe. At every stage, scientists work with groups of experts to create a safe, effective vaccine that protects people from getting certain illnesses. Once a vaccine is found to be safe, it then goes into a larger production process to make enough of it to distribute to millions or even billions of people, to start saving lives.

*There are several databases that track any possible issues with vaccines during phase four and beyond. In addition to the Vaccine Adverse Event Reporting System, there is also the Vaccine Safety Datalink and Post-Licensure Rapid Immunization Safety Monitoring. More information can be found at https://www.cdc.gov/vaccines/parents/infographics/journey-of-child-vacci... 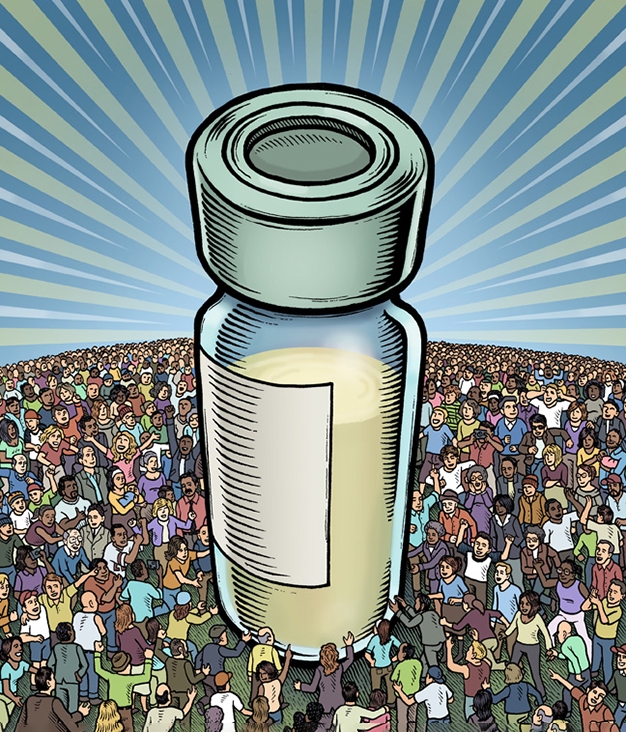 Vaccines go through intensive testing before they are given to people on a large scale. This process ensures their safety. Vaccines have saved millions of lives. Illustration The Vaccine by Mario Zucca.