Prevention: stopping something from happening before it starts.

You decide that you want to plan a party for you and all of your friends. You have the food, the games, and decorations all planned out. All that’s left is to invite everyone to come over. But how are you going to tell all of your friends? 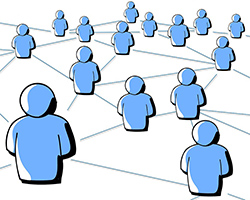 If you send your message to a few people, and they each send it to at least one person, and those people do the same, lots of your friends would hear the news. Image by Gerd Altmann from Pixabay.

Gene drives work by using directed repair gene editing. This enables the insertion of a new gene, called the driven gene, at a particular cut site through the use of a donor template.

Every protein has associated genes that tell cells how to build them, including CRISPR proteins. In a gene drive, both the gene to be spread and genes coding for CRISPR proteins are included in the donor template. The result is that genes for both the driven trait and the CRISPR molecules are inserted at the cut site. 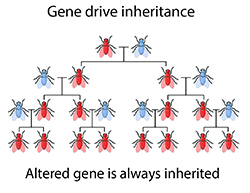 How does inheritance differ with gene drives? Click for more detail.

Because a gene drive includes instructions to build more CRISPR proteins, it is constantly editing the genome. It even edits the genes that are passed onto future generations to include the driven gene. As a result, the driven gene will soon be present in an entire population of a species in just a few generations.

Why Would Scientists Want to Use Gene Drives?

One possible use for gene drives is in the prevention of diseases. Diseases like malaria are carried and spread by mosquitoes. Some people hope to use gene drives to reduce the number of mosquitoes that can carry the disease. Fewer mosquitoes would likely reduce the spread of malaria. 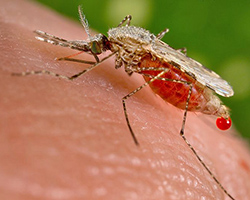 This Anopheles mosquito is one species known to carry malaria. But does this mean that humans have the right to eliminate an entire species? Image by the CDC.

One kind of gene drive that some scientists have suggested is to drive genes that cause only male mosquitoes to be born. Now, you’re right in thinking that this wouldn’t spread beyond that generation. If it worked, there would soon be no female mosquitoes for the males to reproduce with. But, that way, the mosquito population would be greatly reduced. Other types of gene drives have also been proposed. They aim to drive genes that would kill mosquitoes during development to reduce populations.

Despite the benefits, some people worry about how these changes would affects the environment. Fewer mosquitoes may prevent the spread of disease. But it may also negatively affect local ecosystems and food webs. Other people raise ethical questions about if people should even try to eliminate a species at all. 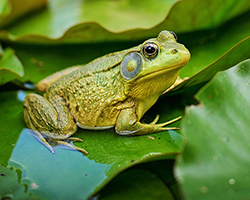 But there are several issues with this idea. First, what makes one species belong somewhere more than another? And who are we to decide what species should get to live in one area or another? Using gene drives in this way also raises concerns about long-term effects on the environment. Some people also worry about the ethics of using gene drives to intentionally drive a population to near extinction.

Currently, no gene drives have yet been used in these ways. But there are many scientists that are actively researching gene drives. 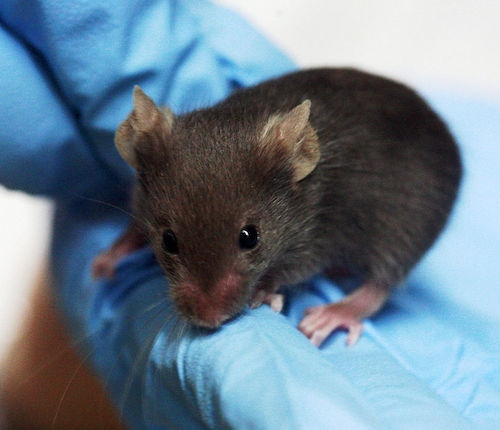 Gene drives have been tested in mice, to show that the concept works in mammals.