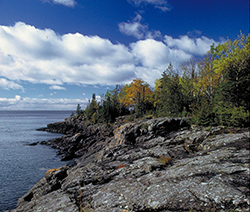 The coast of Isle Royale, MI. This island is in Lake Superior at the edge of the U.S. and Canadian border. Image by NPS Staff via Wikimedia Commons.

You’ve kayaked out to Isle Royale in the middle of Lake Superior in Michigan, USA, on a warm summer afternoon. A few years ago, during winter, it was full of skinny moose, trees had been stripped of their branches, riverbeds had been trampled, and most of the plants had been eaten by the starving herd of moose.

You leave the water and hike through the forest to your campsite. You set up your tent at sunset and start a fire. The cedar trees are stronger now and the forest around you seems thicker in the light of your campfire. You hear howling in the distance—wolves are calling. These wolves used to live in Canada, but scientists trapped them and released them on the island. Could all the changes you noticed really be due to the presence of wolves?

Isle Royale is a good example of species reintroduction as a type of rewilding. Many species that are reintroduced are predators. Predators are very important to an ecosystem. Large predators keep the population of grazing animals like moose and elk lower. This keeps them from damaging the plant populations, so there is enough food for the grazers. Large predators also cause grazers to move around, so the grazers can’t do too much damage to one area. The grazers also spread nutrients (in their poop) around to more areas, helping soil and plants. Smaller predators are also important and are the focus of reintroductions as well, like the black-footed ferret. Black-footed ferrets control populations of prairie dogs and can affect the populations of rodents like mice and voles. 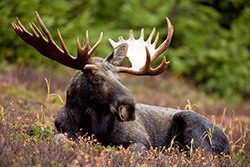 A healthy moose rests in a field. Click for more detail.

Let’s look more closely at the effect of predators on Isle Royale. Since 2011 the moose population on the island had been increasing by ~19% every year due to the lack of predators (2,061 moose as of early 2019). In 2017 only two wolves remained. In 2018 and 2019 the U.S. National Park Service reintroduced wolves to the island in small groups. At the time of the wolf reintroduction, the moose herd didn’t have enough food. Could wolves help this situation? Bringing back the wolves should help the moose by reducing their numbers, so there will be more food available per moose.

The animals on Isle Royale are the focus of many studies. Researchers have collared 20 moose, and the reintroduced wolves. They track those moose and wolves to watch the impacts of the wolves. Researchers also expect the other island species to do better with the presence of wolves. Beaver numbers are expected to go down to manageable numbers with wolves around. Like with the moose, this means less damage to the plants on the island.

The foxes on the island should also thrive with the presence of wolves. Foxes are scavengers and will eat what the wolves leave behind. These are good things; the wolves balance some of the animal populations. 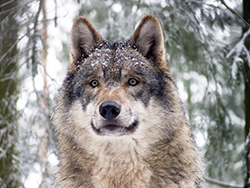 A grey wolf in the forest. Grey wolves were subject to a federal extermination program that went on until the mid 1900's. Since then they have been on a long and rocky road to recovery. Image by Gunner Ries Amphibol via Wikimedia Commons.

Though it can have huge benefits, reintroduction is an expensive option for rewilding. It takes way more effort than allowing natural rewilding to occur. Animals have to be trapped and relocated. Then they have to be tracked to make sure they are doing well. If the animals die then more may be introduced. 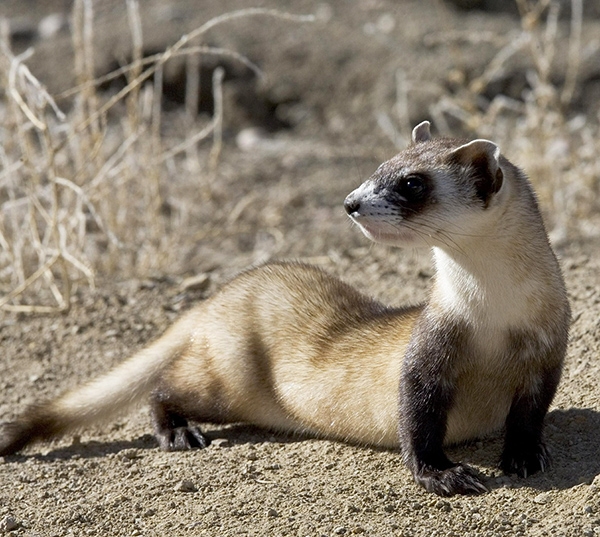 Endangered black-footed ferrets have been the subject of reintroduction efforts in the U.S.

Learn more about other types of ecosystem management in our story Taking Care of Nature.