Apparently Satisfactory Outcome (ASO): in a communication, the reaction of the recipient that makes the signaler stop gesturing.

Hominins: the group of animals that contains all modern and extinct humans.

Homoidae: the group of animals that contains all great apes, including Pan genus, hominins, and others like gorillas.

Pan genus: the group of animals that contains bonobos and common chimpanzees....more

Recipient: the one that receives a message in a communication.

Signaler: the one that sends out a message in a communication.

You’re at a party with two friends.

“Let’s play table football!” one of your friends suggests, “We just need one more player.”

At that moment, another kid asks, “Can I join your side?”

The competition is fierce, but after ten minutes, you and the kid beat your friends! The kid says, “What a fun game—but it’s getting late, I have to go.” 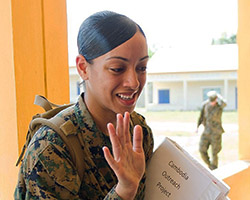 Some gestures can be difficult to interpret, even in humans. Is this marine waving at someone or getting ready to give a high-five? Click for the full image.

You want to give him a high-five to celebrate before he leaves, so—slow motion starts here—you raise your hand and extend your fingers. You see him raising his hand as well, so you start to move your arm towards him. But you do not get the slap on the palm you expected. Instead, he waves and says goodbye. You are left standing with your hand in the air.

You may have experienced an awkward moment like this. Someone misunderstands your gesture—a body movement that expresses an idea or meaning. Researchers discuss great ape gesturing in the PLOS Biology article “Bonobo and Chimpanzee Gestures Overlap Extensively in Meaning.” Scientists found that 90% of gestures of bonobos overlap with those of chimpanzees. But do these gestures share the same meaning in each species?

We Are Not "Snow White" 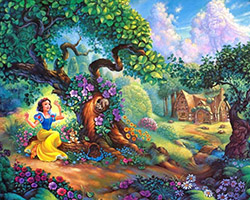 Outside of what happens in fairy tales, it can be very difficult to understand other species.

In the Disney movies, Snow White talks to different creatures in the woods, and they seem to understand her. When we look outside of fairy tales, at communication between different species, we know that languages and gestures can be very difficult to understand between species.

Many great apes are able to engage in intentional communication. They “mean” something with their gestures. They are also able to direct their gestures toward a specific individual (usually another ape of the same species).

Both the “signaler” and the “recipient” can understand the gestures. However, to outsiders, gestures from another species can be really difficult to understand. If we take the example of a human watching a chimpanzee, we can hardly understand what the apes are communicating without years of studying the language.

But humans, chimpanzees, bonobos, and a few other species are all a part of the same group of great apes. Depending on when during evolution we developed these gestures, shouldn’t some species use some similar gestures to mean the same thing?

Past researchers tried to understand the meanings in great apes in an indirect way by looking at the situations in which gestures occur. But the researchers running this study built on this approach by looking at how other animals respond to a gesture.

Make Sure You Get a Response 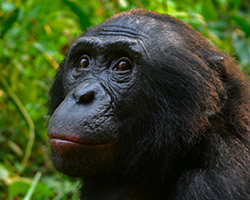 For this study, scientists gathered new information on the communication of bonobos, like the one shown here. They then compared this data to that of chimpanzees, to see where gesture languages overlapped. Image by Evanmaclean.

This is an example of a gesture and related ASOs in bonobos and chimps. Click for more information.

Researchers worked in the field at Wamba, Luo Scientific Reserve, Democratic Republic of the Congo. They analyzed 2,321 bonobo gesture instances (that’s a lot!) and found 33 gesture types and 14 unique ASOs. Some gestures have only 1 ASO. For example, “directed push” always corresponds to the ASO of “climb on me” in bonobos. Some gestures have more than one ASO. For example, in bonobos, “arm up” results in 2 ASOs, “contact” and “climb on me.” Bonobos do have distinct sets of meanings, just like chimpanzees. 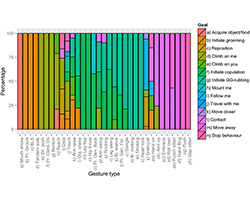 This colorful chart shows how different gestures are related to single or multiple ASOs. Click for more detail.

Scientists know that bonobo and chimpanzee gestures overlap by 88% - 96%. But do these similar gestures share the same meanings? They tested this question with a statistical method called “randomization.” They randomly assigned the gestures to ASOs for each species 10,000 times. Then they checked whether they could obtain a similar overlap of gestural meaning between the two apes. The answer is “no”—such overlap cannot happen by chance.

Scientists validated that there is a large overlap in the meanings of gestures used by both bonobos and chimpanzees. But you may ask, why does this happen? Why are they different species but communicating with similar gestures and meanings?

There are two possible reasons suggested by the scientists. Biological inheritance (the same reason you look like your parents) could be one possible explanation. However, scientists are aware that there may be another way these similar gestures arise. Both animals live in similar environments and have similar bodies. These limit their gestural choices, making it likely that at least some gestures will overlap.

Tracing Communication Back Through Time

But we are still not so sure how this pattern of gestures and meanings evolves. Let’s take a closer look at the possibilities. Both bonobos and chimpanzees belong to the genus (the grouping of animals just above species) Pan. We humans are from the genus Homo—we are not from the Pan genus. But in fact, we are all great apes (Family Hominidae). This means at some point in the past, we shared an ancestor with bonobos and chimpanzees.

The key question to solve this puzzle is: does the hominin lineage (including us modern humans and extinct humans) also share and understand these great apes gestures?

There is no clear answer yet – but perhaps you can try for yourself. There is a “dictionary” of the apes’ gestures in the researchers’ article. Perhaps you can study up and try to communicate with chimpanzees at your nearest zoo or wildlife park. 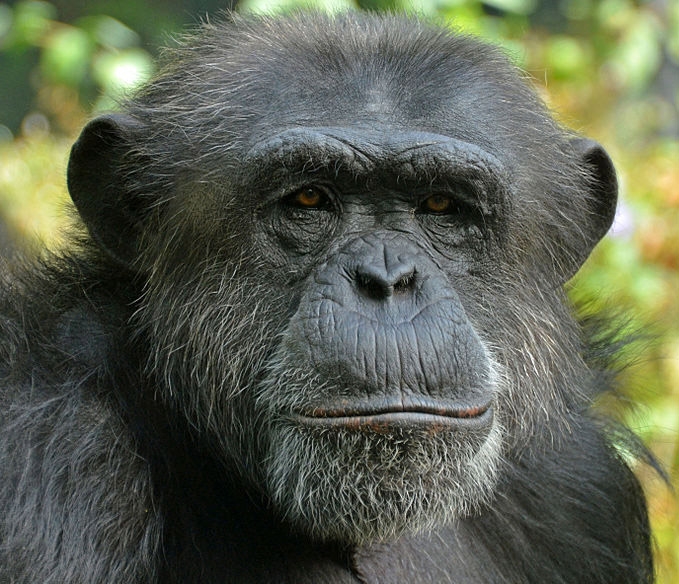 Chimpanzees, like this one, have many different gestures that they use to communicate to other chimps. Closely related bonobos use a lot of similar gestures, but do they mean the same thing?
Bonobo and Chimpanzee Gestures Overlap Extensively in Meaning
Learn how to read a scientific article