Antibacterial: anything that destroys bacteria or stops its ability to grow and/or reproduce.

Leachate: any fluid that is passing through matter, such as water moving through soil.

Plasma: a substance that is similar to gas but can carry electricity. 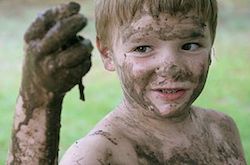 Mud is dirty to roll around in, but scientists are learning that parts of it can be useful, too. Image by David K.

Mud is pretty dirty. It can get stuck between your toes or behind your ears, and can make your hair stand up straight. Getting dirty while making mud pies and mud castles can be a lot of fun, but parts of mud can actually be pretty useful, too. Some clays, components of mud, carry special bits of molecules (called ions) that can kill bacteria.

Bacteria are small organisms (we call them microorganisms) that can't be seen with the naked eye. Even so, bacteria can be found almost everywhere. In fact, your body is covered in bacteria. But there’s no need to panic, as most bacteria are harmless. It turns out that only some bacteria are dangerous and to deal with those, we use different types of medicine.

In the PLOS ONE article, “Exchangeable Ions are Responsible for the In Vitro Antibacterial Properties of Natural Clay Mixtures,” scientists at Arizona State University present their studies that show the special ions that certain clays carry helps them to kill bacteria. 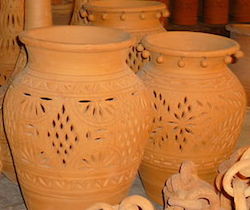 Clay is found in soil and it exists all over the world. In some countries, it's used to make bricks for building, to make dishes to eat with, or to make art and musical instruments. With so many uses, you might wonder what this stuff is made of. If you look closely, you’ll find that clay is made up of many small particles that contain lots of minerals. The minerals in clay can come in many different combinations, which makes different types of clay.

In this experiment, scientists focused on clays that are able to kill bacteria. In particular, four special clays were picked for this study because they have killing ability against a variety of bacteria, including the bacteria commonly known as MRSA, which is pronounced ‘mer-sa’. MRSA is a very dangerous bacterium because it is harmful and hard to treat with antibiotics. Using clays that kill MRSA, scientists wanted to figure out exactly how the clay (or what in the clay) was killing this type of bacteria. 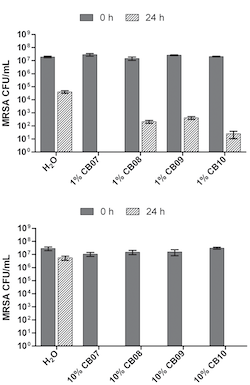 Scientists found that the type of clay and how much of it was used were both important for how well it could kill bacteria. Click for more detail.

The science of chemistry can explain the way things are made, how they interact with other things, and how they can change. For example, chemistry can tell us how a fire burns, or how sugar dissolves in water. It focuses on what is happening at an atomic level. Atoms are the tiny little bits of matter of which everything is made.

Atoms that have a specific charge are sometimes called ions. Ions play important roles in chemistry. In clays, a lot of ions are attached to the surfaces of clay. These ions are known to detach from clay when in water. Also, some ions are well known to cause toxicity, or harm to organisms. Knowing this, scientists wondered if the ions from the clay were killing the bacteria. Because different clays had killing abilities that were unique, scientists also wondered if clays have different ions. 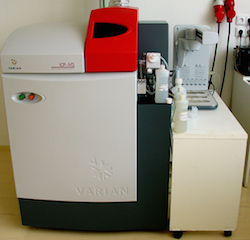 Scientists used a mass spectrometer, shown here, to measure the amount and type of ions in the clay. Image by KarelJ.

To answer these questions, scientists turned to ICP-MS. ICP-MS stands for inductively coupled plasma mass spectrometry. Say that ten times fast! ICPs create a state of matter called plasma (as opposed to solid, liquid, or gas). Plasma is ionized gas, which means it has a positive or negative charge. A good example is the gathering of charged air that can make lightning. In the lab, scientists used ICP to ionize clay samples, turning clay atoms into ions. This allowed the scientists to measure the amount and type of ions in the clay using mass spectrometry (MS).

Differences in the number of ions on each clay led the scientists to their next question: are ions of iron, copper, nickel, cobalt, and zinc responsible for clay bacterial killing ability? To test this idea, scientists ran water through the clays, which let them collect water that held the ions that were once attached to the clays. This water (also called leachate) holds the same bacterial-killing ability (or lack of this ability) as the clay from which it came. 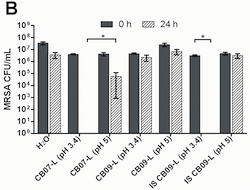 Scientists found that ions are important for killing bacteria, but only when combined with low pH. Click for more detail.

Scientists took the leachate that didn't kill bacteria and added the ions of iron, copper, nickel, cobalt, and zinc. They brought the ion levels up to match those found in the clays that do kill bacteria. However, because ion toxicity (the ability of ions to harm something living) typically involves pH, ions at different pH levels were also tested. pH is important to ions because ions can have different abilities depending on the pH level.

After this step, scientists did a similar bacterial killing test as in their first experiment. They found that increasing the concentrations of these ions gave the leachate bacterial killing ability, but only if the pH was at the right level. Bacteria killing only happened when there was both low pH and certain concentrations of iron, copper, nickel, cobalt, and zinc present. Either low pH by itself or the ions with a higher pH did not kill the bacteria.

So the next time you come across a puddle of mud, remember that hidden within all that dirtiness are special ions carried by clay. While you wouldn't want to slather mud onto a cut or other wound, scientists might be able to use that dirty mud to make some ionic medicine.

Additional Images from Wikimedia Commons via Mets501 and the National Institutes of Health. 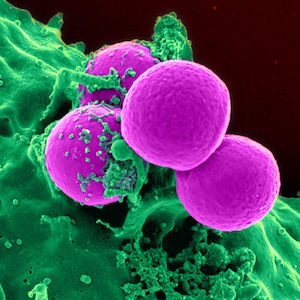 Scientists wanted to learn how clay could be used to kill MRSA, the very dangerous bacteria shown above.
Exchangeable Ions Are Responsible for the In Vitro Antibacterial Properties of Natural Clay Mixtures
Learn how to read a scientific article